The first eight-cylinder engine from Porsche is a racing engine. The type "753" won a Formula 1 race in 1962, its slightly bigger brother "771" won in the years after in Daytona, Sebring, or at the Targa Florio. We look back on conversations with Hans Mezger, the constructor, and Egon Alber, the mechanic of this formidable engine.

How long does the "eternal life" of a racing engine last? The renowned journalist Helmut Zwickl attached this label of eternal life to a very specific Porsche racing engine. Actually: The eight-cylinder boxer engine with the designations "753" and "771" was in use from 1962 to 1968. An eternity in a time where Formula 1 engines often have an expiration date of one year.

The immortality of the small eight-cylinder engine is all the more astonishing because it was not always regarded as an ingenious throw. Hans Mezger, who died in June 2020, gave us a detailed report on this engine a few years ago: "It wasn't until Daytona in 1968 that we saw how good this engine was." In conversation, the always friendly and quiet Hans Mezger immersed himself deeply into the subject of racing engines: "There were some problems to be solved. In the winter of 1967/68, we changed the mounting of the flywheel, enlarged the oil pump as well as the shaft diameter of the exhaust valve. And the engine also got more cooling air". 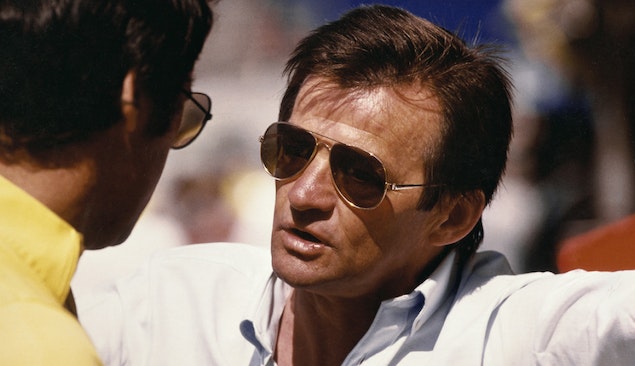 During pre-tests for the Daytona 24 Hours, one of the 2.2-liter engines had made such a lasting impression that it was not even replaced before the start. In the race itself, the most successful of all Porsche engine designers did not need to worry about its 270 hp engines. It was he who suffered a particularly cold night on the first weekend of February in 1968. "I thought it was never cold in Florida and I didn't pack warm clothes, I was freezing terribly," he told us. That night left its mark on the sunny US state: Almost the entire orange harvest fell victim to the cold. The race result, however, must have warmed Hans Mezger: Three Porsche 907s raced across the finish line as winners in formation flight.

The history of the engine goes back to 1960. In Formula 1, the 1.5-liter formula was proclaimed for 1961. In Zuffenhausen it was soon clear: For this formula, the well-known four-cylinder "Fuhrmann" engine, which was used in various versions, would no longer be competitive.

In the summer of 1960, Hans Hönick began to design an eight-cylinder engine. Because the "Fuhrmann" engine was "state of the art" (Hans Mezger) at Porsche at that time, Hönick's design closely followed this type of 547 with regard to the valve train. This meant that he too had kingpins for the valve control. Like the four-cylinder engine, the eight-cylinder also had two camshafts for each row of cylinders. The concept allows high engine speeds but is quite complicated. Owners of these engines, also known as "Carrera", know to this day that only very talented mechanics can set these engines to their optimum. 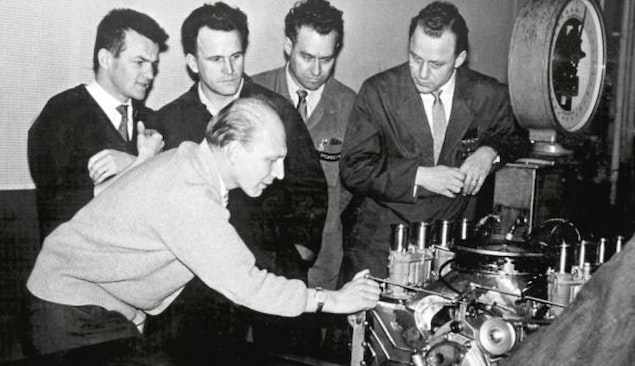 Egon Alber was one of them at Porsche for many decades. He was one of the very first apprentices to be hired by the young company in 1944. In December 1960, he was the best man for the assembly of the eight-cylinder engine. His commentary in retrospect gives a deep insight: "It was a fabulous job mechanically". A shrewd mechanic can screw together the individual parts of the engine quite quickly. But it takes many days, or rather weeks until everything fits together. "It never went below 100 hours," was Albers' experience.

He took up the example of the royal shaft: It needs a very special kind of play, otherwise, it becomes a spoilsport. Back then, however, it was not possible to manufacture parts that fit as precisely as they do today. So the bearings had to be reamed out individually. How does something like that work? These experts put a long reamer into the bearing, then the parts were twisted against each other.

On December 12, 1960, the engine was to run on the test bench for the first time. "But it wouldn't, and wouldn't start," Egon Alber told us. Had he made a mistake during assembly. Everything was checked, everything seemed to be in order. "With cursing and praying and all kinds of tricks, it finally ran." Horror spread in front of the test bench when the specialists recognized the performance yield. Egon Alber: "105 HP - a catastrophe. Our best four-cylinder engines produced 175 hp at that time". The eight-cylinder was supposed to deliver 200 hp.

Egon Alber recognized the main reason for the poor results: "The valve angle of 90 degrees did not work with our small cylinder sizes". Hans Mezger first reduced the angle to 84 degrees, later even to 72 degrees, and optimized the combustion chambers of the eight cylinders for this purpose. The performance curve rose steeply. In the Type 804 Formula 1 racing car, the engine produced 185 HP. On May 20, 1962, two "804" were used for the first time at the Holland Grand Prix in Zandvoort. Dan Gurney first broke the engine, then the gearshift. Jo Bonnier came seventh, still behind Carel de Beaufort in the old four-cylinder Porsche. Ferry Porsche, who was always skeptical about the project, gave the 804 a creative break in the middle of the season. The engine was further improved, as was the chassis.

At the French Grand Prix in Rouen on July 8, 1962, Gurney started from sixth place on the grid and drove a brilliant race. When Jim Clark in the Lotus and Graham Hill in the BRM dropped out of the race before him, it was the first and to this day only time a Porsche won a Formula 1 Grand Prix. In the 25 wins between 1983 and 1987, Porsche was McLaren's engine supplier. Despite these successes, Ferry Porsche ended his Formula 1 involvement. For him, the gap between Formula 1 and series development had become too big. Helmut Zwickl, the journalist, expressed understanding: "The experience of a tightrope walker is of no use to a pedestrian at the crosswalk".

After Daytona in 1968, a 907 also won the 12-hour race of Sebring (Hans Herrmann/Jo Siffert) and the Targa Florio (Vic Elford). But a little later the eight-cylinder with the designation 771/1 was ready for the museum. Hans Mezger, who had designed the 911 engine, added two more cylinders to the six-cylinder. The three-liter engine produced 350 hp and was installed in the new "908" racing sports car. In terms of design, this engine had nothing in common with its predecessor except the number of cylinders. First victory: The 1000-kilometer race at the Nürburgring on May 19, 1968, with drivers Siffert and Elford. In 1969, Porsche became the brand world champion for the first time with the 908. Then came the era of the magnificent twelve-cylinder 917. Design engineer Hans Mezger came up with an impressive comparison to Porsche's first eight-cylinder: "The twelve-cylinder 917 was assembled four times faster than the complicated 771. 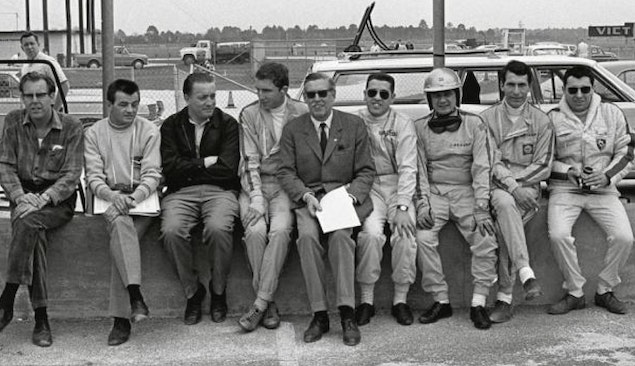