The racing car of the century

Hans Mezger and his Porsche 917. "There is probably no other racing car in the history of the automobile that has received the same amount of attention, recognition, admiration and praise," stresses the overall project manager five decades after the series winner's debut. And that also has to do with turbo technology.

The designer Hans Mezger smiles when he looks at the Porsche 917 after 50 years. "Many memories of that time are coming back," says Mezger, born 1929. With noticeable pride in his always quiet voice, he reports on the great sensation that this sports car has caused among fans and experts alike. Two World Sportscar Championship wins and two CanAm overseas titles are legends. "But with the 917 came the breakthrough of exhaust gas turbocharger technology," notes Mezger, who also designed the 911 boxer engine. The Porsche 911 Turbo made its debut in 1974. Many drivers nowadays experience the results when they step on the gas pedal. Because exhaust gases accelerate a supercharger, which in turn provides additional oxygen for combustion, performance increases rapidly. Roughly speaking, this is the case with half of all road cars. A few gray hairs more, the facial features testify to life experience, but facial expressions, dynamics and devotion have not diminished over the years. "Actually, the 917 was only really successful for four years," Mezger looks back.

This applies to the years 1970 to 1973. He smiles once more. The 917 has lost none of its fascination. Exactly five decades have passed since this Porsche was presented at the Geneva Motor Show in March 1969. At that time, Porsche's head of development Ferdinand Piëch and racing driver Gerhard Mitter pulled the cover off a car that was supposed to take speeds in motorsport to new dimensions. 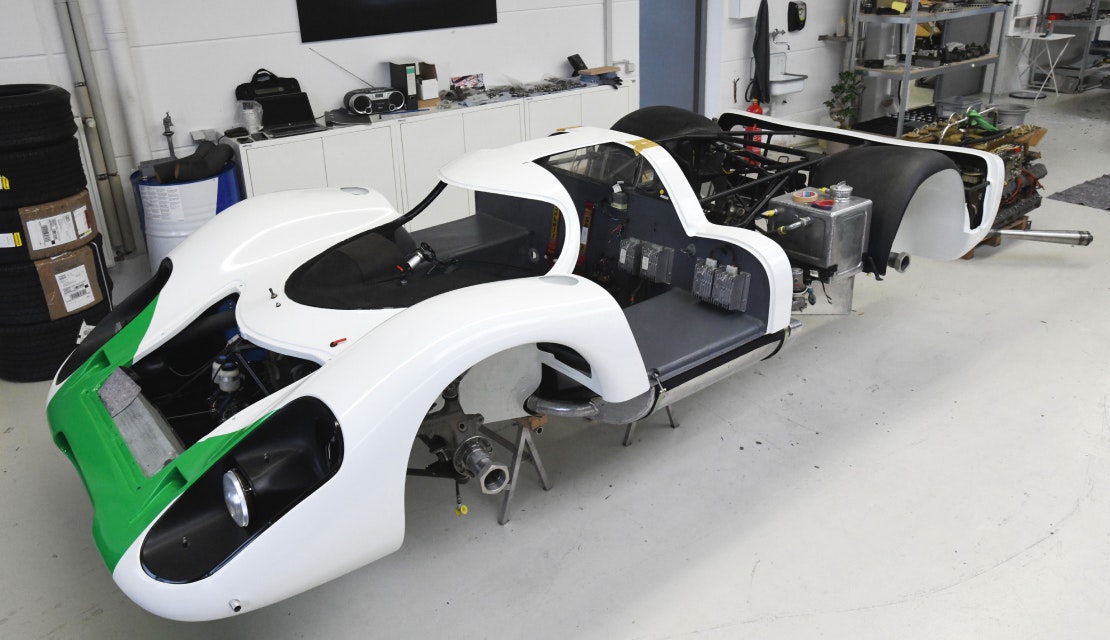 By 1968, the light and agile Porsche had won respect against much stronger competitors such as Ferrari or Ford. But class wins were not enough for Piëch, an engineer thinking in extremes. He took a close look at the regulations for the 1969 season: If a manufacturer builds 25 units of a sports car, he may use engines with a displacement of five litres. In mid-1968, a team led by this overall project manager Hans Mezger began working on a racing car of superlatives. This included a 12-cylinder engine with an initial displacement of 4.5 litres and more than 500 hp. In May, 25 Porsche were ready for delivery in Zuffenhausen. At the end of the 1969 season Jo Siffert/Kurt Ahrens won the first World Championship round in Austria with a 917. The balance until 1973: Two World Sportscar Championship titles, two Le Mans victories and - thanks to turbo technology now well over 1000 hp - two championship titles in the CanAm Series. The 917 was entitled to call itself the "racing car of the century". 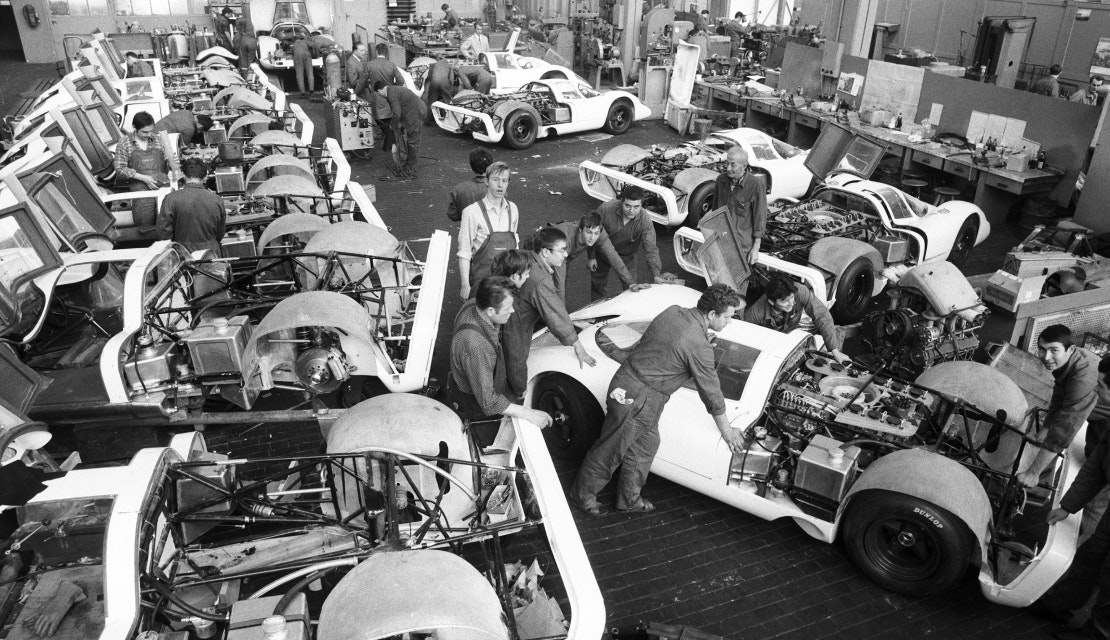 1970 Porsche won for the first time at Le Mans

The exhibit in Geneva in 1969 bore the chassis number "001". This car also appeared at the IAA in autumn 1969 and was the first Porsche to wear the light blue-orange "Gulf" colours, which made Steve McQueen legendary. "The 001 served representational purposes, this 917 was never used in a race," stresses Alexander Klein, Head of Vehicle Management at the Porsche Museum today.

In June 1970 Porsche won the 24 Hours of Le Mans for the first time. Hans Herrmann and Richard Attwood drove the 917 with the chassis number "023" to the biggest success so far. This car later changed hands several times. But Porsche wanted to communicate the Le Mans victory, as one would say today. As a result, the "001" was converted to the look of the Le Mans winner car. For 45 years, the now red-white 917 stood for the Le Mans success, and he completed a few laps at historic motorsport events. "However, it was not driven more than 300 kilometres," explains Alexander Klein.

50th anniversary of the Porsche 917

In view of the 50th anniversary of the 917, the idea was born to restore the car to its original condition. "Fortunately for us, further developments of the 917 were not incorporated into this vehicle," Klein continues. For the restoration, however, about 3500 hours had to be spent during the last twelve months. Drawings were digitized and modern 3D technology was used. The former bodybuilders, designers and project managers Hans Mezger himself were also consulted. Everything was done with the aim of preserving as much of the old substance as possible. It was essential to add around 15 percent to the tubular frame. Front and long tail were redesigned with the help of the old drawings. Roof, doors, windscreen, sills, even the lamp holders are original parts, as are chassis, engine and gearbox. Just in time for the 50th anniversary after the Geneva premiere, this car had its first appearance at Retro Classics in the old colours since 1969. At the "Members Meeting" at the beginning of April in Goodwood, the "001" will be seen in action. From 14 May to 15 September, it is part of a 917 special show at the Porsche Museum.

Constructor Hans Mezger deserves the final word. He wrote it for Walter Näher's Porsche 917 standard work, which won many awards: "There is probably no other racing car in the history of the automobile that has received as much attention, recognition, admiration and praise as the Porsche 917. It is noteworthy that this exceptional vehicle has attracted interest not only from motorsport enthusiasts, but also from colleges, universities and engineering associations around the word." 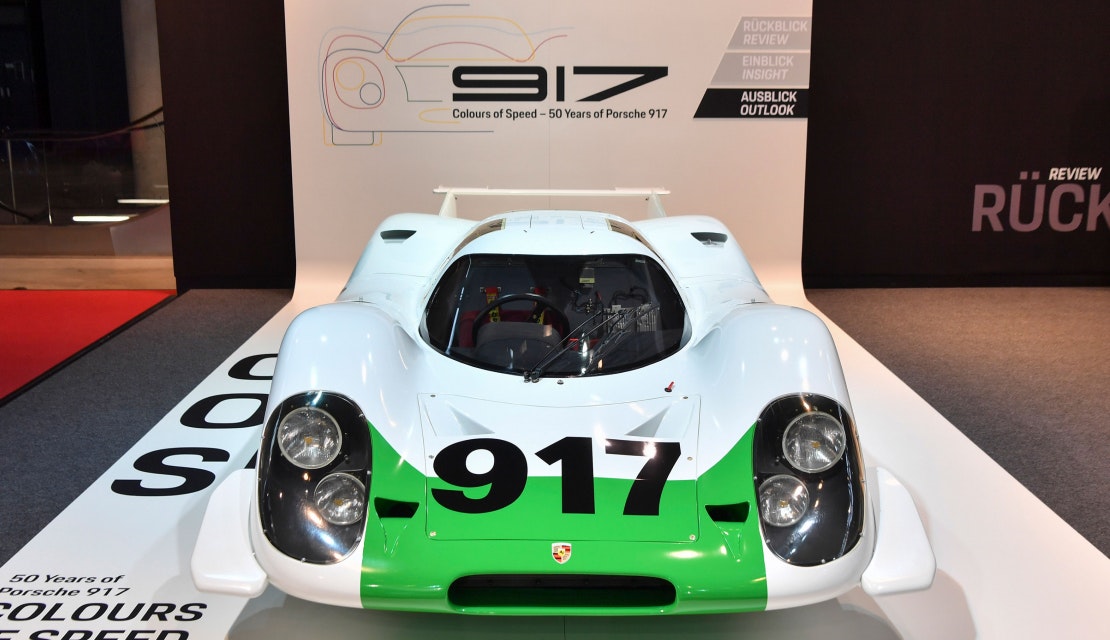