Former baseball star C. J. Wilson was allowed to drive the new Porsche 718 Cayman GT4 Clubsport a full half year before its official launch. Top secret, in the middle of the California desert. No, it was not a mirage. But the man has a vision nonetheless.

Willow Springs Raceway, California, USA. Guards secure the area, visitors are screened, mobile phones with camera must be handed over. Only then is the new Porsche 718 Cayman GT4 Clubsport, still hidden under a black veil, rolled off the transporter. The cover is removed, mechanics check the oil level and tire pressure of the treadless slicks.

Then a Porsche engineer from Weissach starts the race car – in the conventional manner, by turning a key to the left of the steering wheel, the same way as in any other 718 off the track. Former baseball player Christopher John “C. J.” Wilson gets ready, puts on his helmet, slips on his gloves, expertly slides into the tight racing seat. Seatbelt buckled, a few final instructions from a mechanic, then the first roll-out: system check. Back to the pit box.

Everything’s running smoothly. C. J. is cleared for five laps. He comes back to the pits after eight. With a huge grin on his face. “This car is awesome!” The only reason he boxed was because he was running low on fuel. “The mechanics gave me just a couple of gallons of gas; they probably wanted to play it safe,” Wilson laughs. 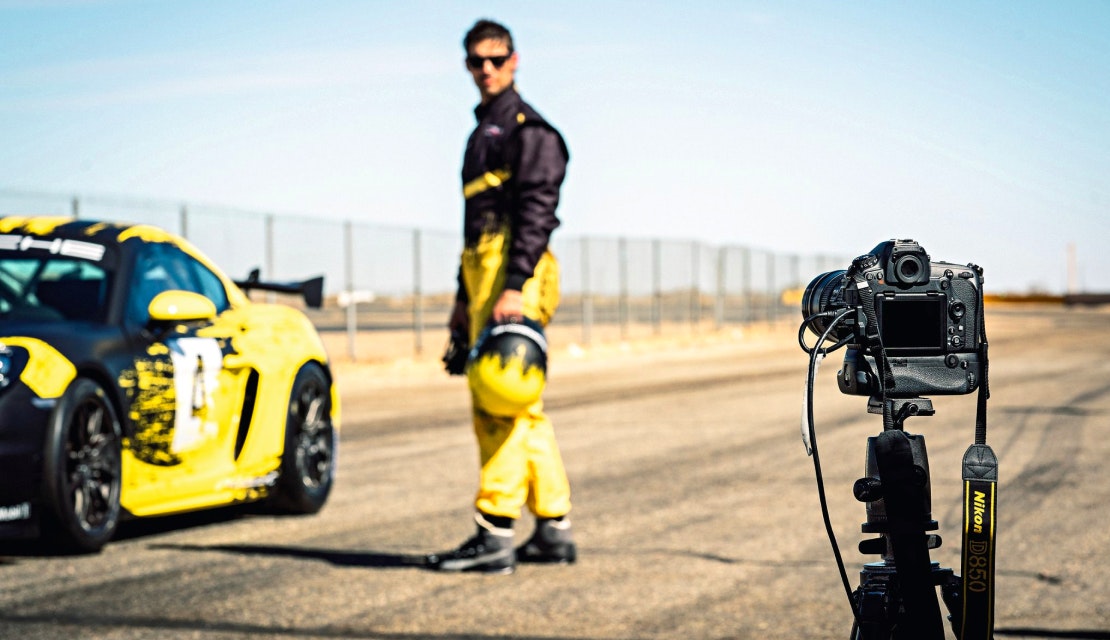 In the US, the former Los Angeles Angels of Anaheim pitcher is not only known for his athletic achievements, but also for his passion for cars. And the thirty-nine-year-old is the kind of person who always has his eyes on a prize. His biggest dream is to compete in the 24 Hours of Le Mans, as a driver and with his own team. And Wilson isn’t the type to leave something to chance. On the sidelines at Willow Springs, he admits that he may skip a career step or two on the way to Le Mans.

As a professional athlete, he knows how to work the media – and so expertly lands this gig with the new GT4 Clubsport and Porsche’s decades of motorsports experience. It is experience he trusts. But we may need to start a bit earlier if we want to understand this man and his shrewd ambition. Already at the age of four, he is taken to dirt track races; his father works as a pit mechanic for various racing teams.

At six, he is competing in kart races – and develops a special taste: he is especially taken with Porsche. “The 962 was the car that gave me a sense of the myth, a myth of a car that you need to win.” Wilson goes to his father and says that this is the kind of car he wants. The only problem: for a car like that, you need money, lots of money. 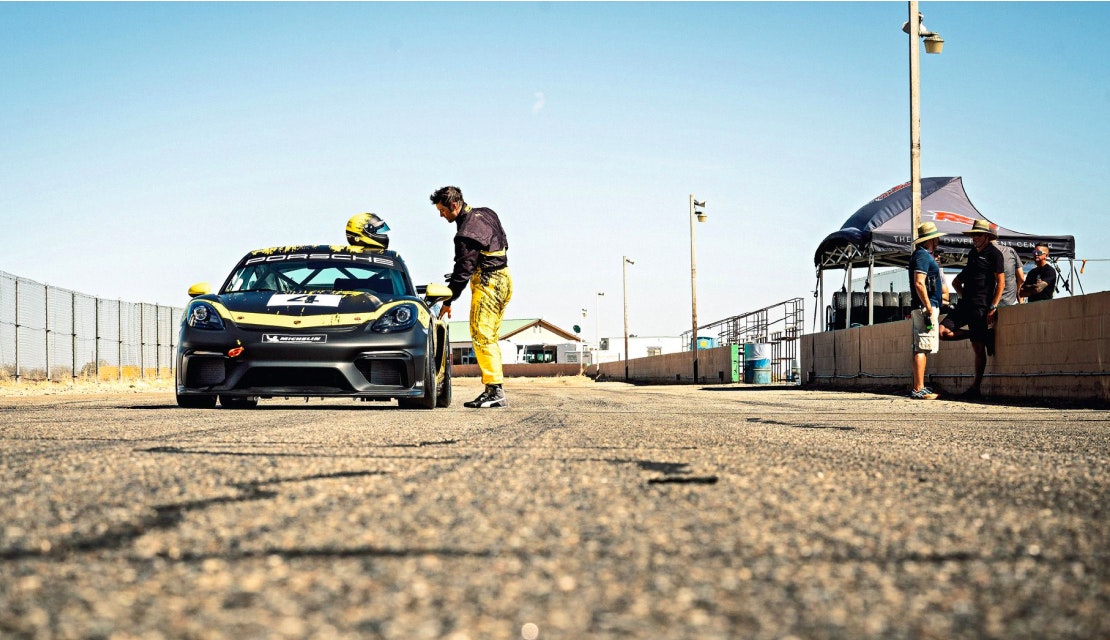 So Wilson works out his first plan: become a professional athlete and earn enough to buy the sort of cars he dreams of. Even back then, Wilson was only marginally interested in probabilities and realistic chances. His first idea is becoming a professional basketball player. At the time, however, he doesn’t think he would grow tall enough. Today he measures 6'1". He chooses baseball instead.

After the first training, the coach tells him he is so bad he should try soccer instead. But soccer wouldn’t have made Wilson rich – at least not in the US. So he focuses on getting better at baseball. He works hard and meticulously on himself, reads books, takes notes, consistently pits himself against people bigger than him. And the American dream comes true. From his first salary as a pro, Wilson buys himself a Porsche 993. And even today, Wilson doesn’t even try to keep his passion for sports cars to himself. With almost childlike enthusiasm, he talks about driving out in a McLaren P1, which, of course, he shares with his followers on social media.

Wilson’s vehicle collection is legendary. A well-known American car site once compiled a list of the ten coolest celebrity car collectors – Wilson came in third behind Jay Leno and Ralph Lauren. But the two-time All-Star player is not the type to be satisfied with what he has. And so he’s already set himself his next goal: competing in Le Mans as driver and team owner. That has little to do with dogged determination; on the set, he seems relaxed, pleasant-natured – and focused. A couple of cool lines and before you know it Wilson is an actor in front of the camera. 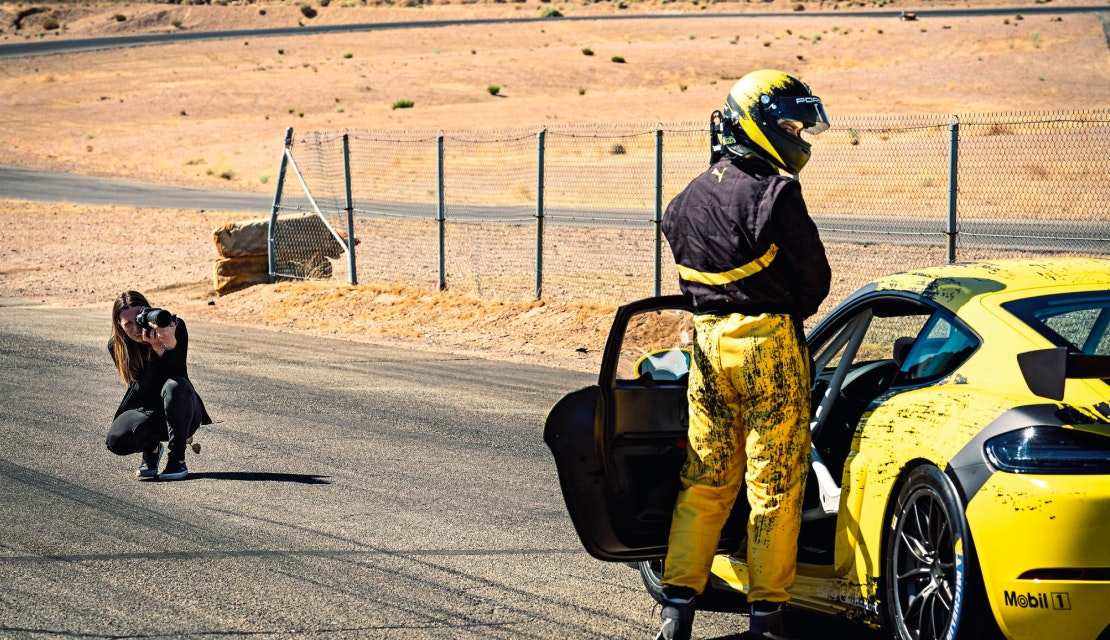 And he can hardly wait to get back on the track. If you listen to him talk, you won’t doubt it for a second. He then says things like: “The GT4 Clubsport is a genuine race car. You can prepare a road car for the circuit and have some fun with it. But when it comes to driving a timed lap, you quickly find yourself in an environment where many others are also racing against the clock. And then the car comes into play.”

Or: “When you drive a new car for the first time, there’s always a certain amount of caution. The best race car drivers are always one step ahead of their cars. They know what’s going to happen next. But to reach that point, you have to spend a lot of time with a car and really understand it. You have to get to the point where you can take a bend virtually blind, because you have to know exactly what you have to do in order for the car to do what you want. Of course, this takes time and practice. But when you get there, it feels right.”

Without a doubt, if anyone knows when the right point has been reached, then it’s C. J. Wilson. It won’t be long before he’s competing at Le Mans – so much is clear. His racing team, with which he is entering races like the Porsche GT3 Cup Challenge, is called CJ Wilson Racing. 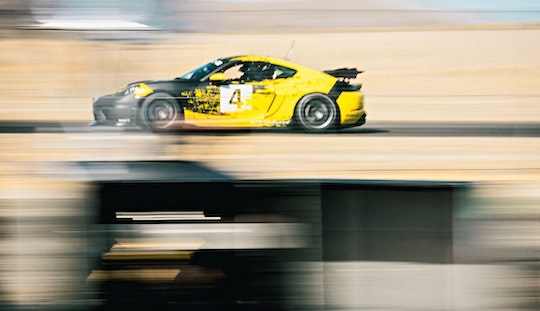 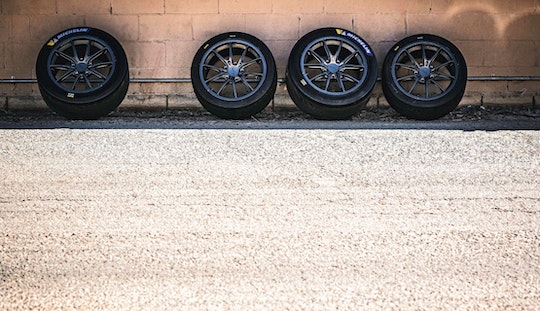 Christopher John “C. J.” Wilson was born on 18 November 1980 in California – and drove his first kart race at the age of six. He was California Junior College Co-Player of the Year when he was 19 and made his Major League debut in 2005. As pitcher for the Los Angeles Angels of Anaheim, he earned millions. Today he owns the CJ Wilson Racing team.