356 and 911. Or 928 and 944 - everyone knows these number combinations. But 754? Even some Porsche experts doubt it. There is this Porsche. This unique piece can even be called the direct predecessor of the 911. It will soon celebrate its 60th birthday. 20 years ago it was top-restored.

Let's take a closer look at the Porsche that (almost) nobody knows. The front in particular, with its long fenders, headlights, and flat hood, anticipates the characteristics of the 911. The roof section, on the other hand, is much less sleek. The proportions are not quite right. This was one of the reasons why Ferry Porsche finally rejected the project.

At the end of the 1950s, the designers in Zuffenhausen were thinking intensively about a successor to the 356. A four-seater Porsche was also to be shortlisted. The Pro-argument: The market could become too small for two-seater sports cars. The Con-argument: Other manufacturers have more experience in building sports sedans. The result is quite obviously a compromise. The styling is by Ferdinand Alexander "Butzi" Porsche. The designer sets the wheelbase at 2400 millimeters. With a smaller distance between the wheels, a four-seater is not feasible. By the way: the wheelbase of the 901 he created and presented in 1963, which was renamed 911 a little later, is 2211 millimeters.

After some 1:5 models, the prototype is built. Internally it is often called "T7". By the way: "T5" stands for the 356 from 1959, "T6" for the 356 from 1961. The T7 initially painted all in white, rolled under its own power for the first time on November 1, 1960, almost exactly 60 years ago. At the wheel is Helmuth Bott, later Porsche's Chief Development Officer. He is unhappy with the handling of the car. His verdict: "We can forget that!" 130 HP are in the specifications. At that time, only the constructively very elaborate four-camshaft engine, also known as the "Fuhrmann" engine, could achieve this. A six-cylinder engine, also with a displacement of two liters, was later added to the prototype. At some point in time, the car will be re-injected in metallic green. Towards the end of its time as a test vehicle, the "Fuhrmann" four-cylinder engine is again working in the chunky rear. 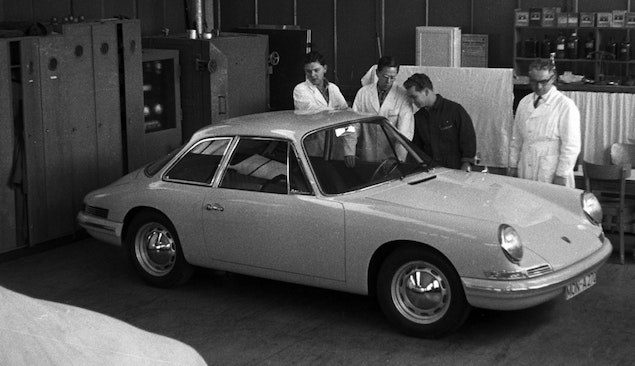 After Ferry Porsche’s cancellation, Type 754 spends almost four decades mainly in underground garages. Only a few times it can be seen in the old and small Porsche Museum. Wherever the visitor's gaze falls, the car is being refurbished, the rest of it is rotting away. Around the year 2000, the then museum director Klaus Bischof takes a closer look at this Porsche. His verdict: "It has suffered damage to its condition, not much can be saved from rubber parts such as seals. Cars that are driven are usually in a better condition than such long-term parkers". But Bischof also says: "The car belongs to Porsche history, that's why we restore it. The goal is always the same with factory restorations: Top condition in keeping with the original substance, as much as possible, and in any case the car must be ready to drive.

First of all, an inventory is made to get a feeling for which parts are missing or can no longer be saved. Then the engine and transmission are removed. Finally, the car is expertly disassembled and sorted on shelves. When the car is taken apart, the dismantled parts are divided into three categories: Reusable, ready for overhaul or to be newly manufactured. The tank, for example, can be reused after extensive cleaning, as can the steering knuckles except for the bearings. Parts such as the shock absorbers or the master brake cylinder are newly manufactured. Engine and transmission are reworked by specialists in Zuffenhausen. 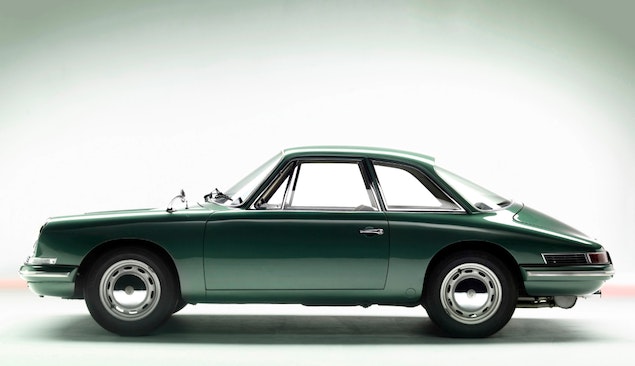 The body of the 754 has survived the four decades quite well. Only a few panels have to be newly manufactured and welded in. A small but useful break in style: The new paint - metallic green again - is based on an environmentally friendly water-based paint system.

There is a high hurdle to overcome before starting it. The keys have been lost over the decades. In this case, only one thing helps: Remove the lock and send it to a specialist. The major restoration is repeated here on a small scale: The part is disassembled into its individual parts. While retaining the substance, the specialist continues to work on a new ignition key until he gets the hang of it. Conclusion: This largely forgotten Porsche has been drivable for 20 years now.