On the road in a Porsche 550 Spyder. And suddenly first Walter Röhrl overtakes. And a little later a Guf Porsche 917. Not a dream after long summer nights. Everything happened like that. At the Solitude revival. 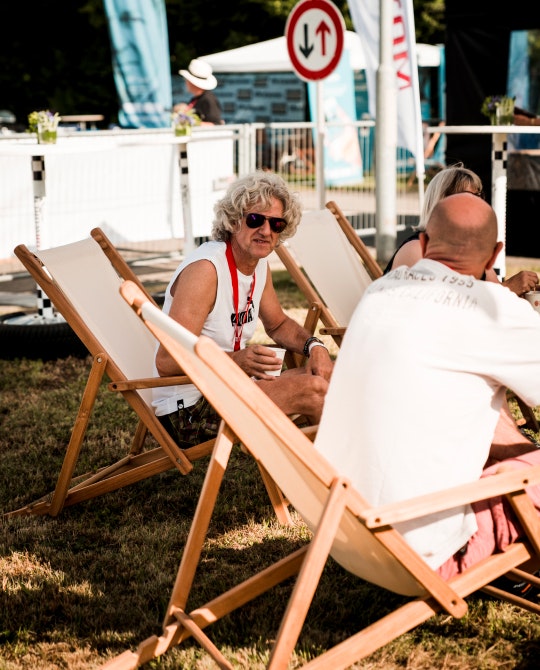 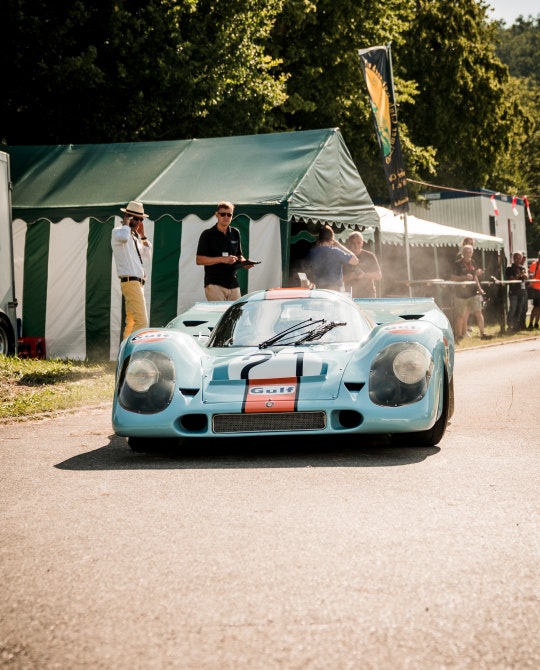 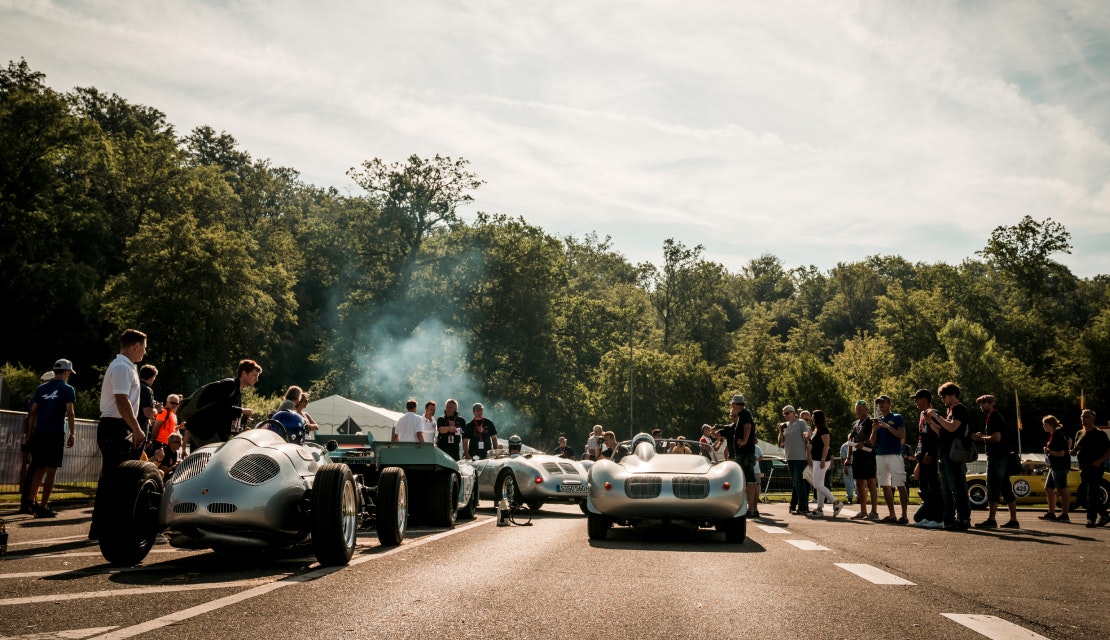 Would you like to drive a 550 Spyder at Solitude Revival? There are moments in life when you shouldn't hesitate a second. Astrid Böttinger, press spokeswoman for the Porsche Museum, hears a hastily pronounced »yes, of course!« Her reaction: »I didn't expect anything else.« Only days later I stand in front of a beautiful 550 Spyder with chassis number 64 from 1956. »Please step on the struts on the ground or on the seat when boarding, not on the thin vehicle floor,« emphasizes the Porsche man next to me. He notices my frown. »We'll get on the seat, too.« Maybe with socks I think, and thread myself into the flat carriage with maybe a little bit of awkward movements. Seats are for sitting, especially this one. Everything fits immediately. I put five individual belts - which did not exist more than six decades ago - into the central lock. 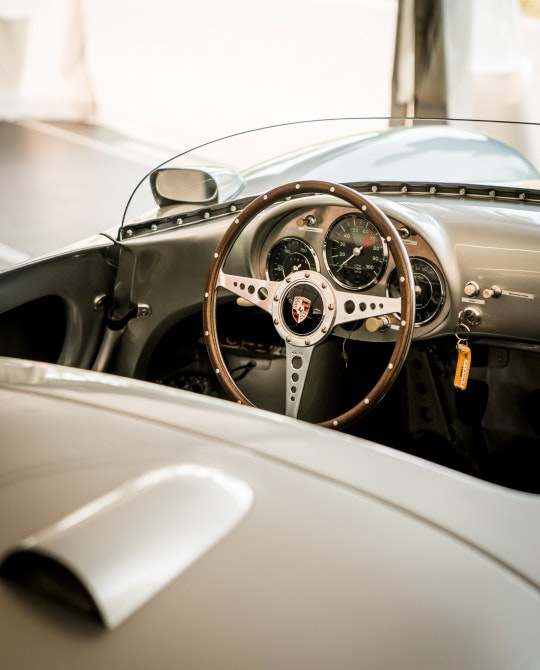 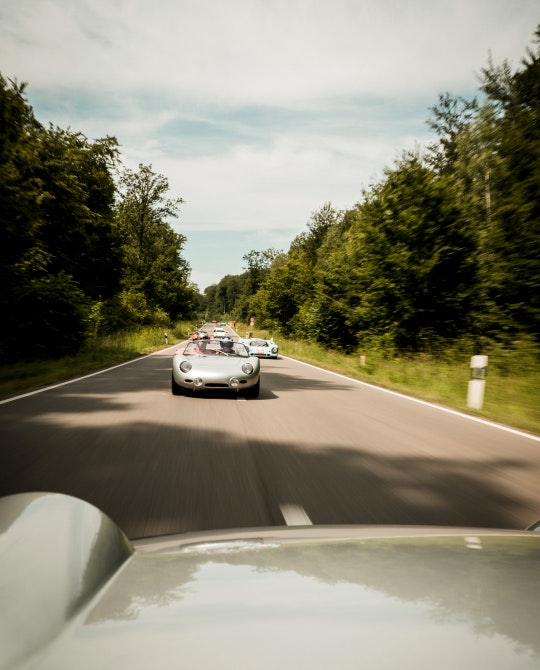 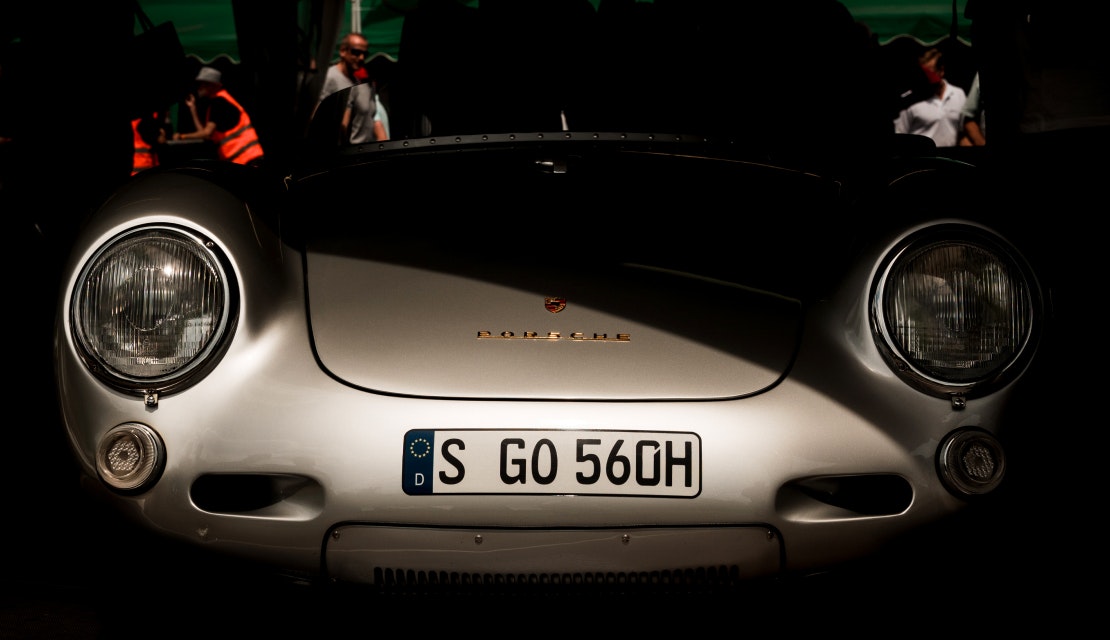 Brief concentration on everything that the mechanics around Kuno Werner, the head of the Porsche Museum workshop, have given me on my way. Turn the key, press the starter button. The pull switch for the fuel pump is pulled out. So thats good. The starter motor turns briefly, then the engine starts barking. It is the legendary Fuhrmann engine with the abbreviation 547. What's that supposed to mean? It is the five hundred and forty-seventh Porsche construction. And rightly so, the 550 Spyder just received its key figures three sheets later. The fact that it weighs barely more than 550 kilograms has nothing to do with his name. Four-cylinder boxer, 1.5 litre, the data sheet indicates 110 hp at 6200 rpm. We don't want to impose such high revs on the veteran. Perhaps not such a good thought, as I only realize in retrospect. That a 550 Spyder was auctioned off some time ago for 5.5 million euros, I tried not to think about. 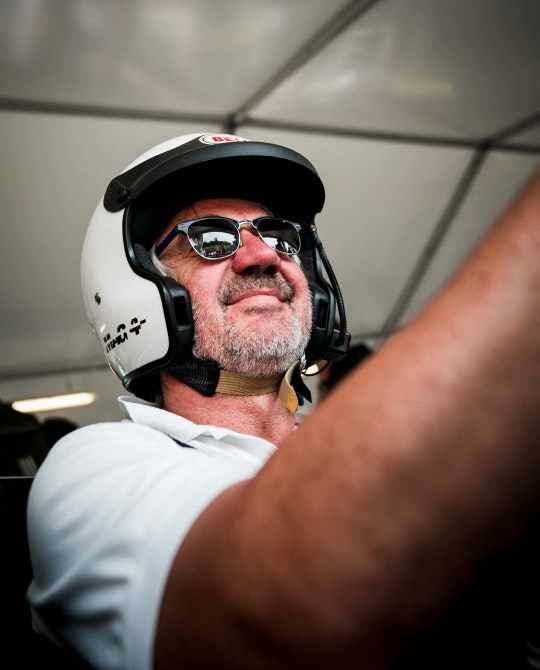 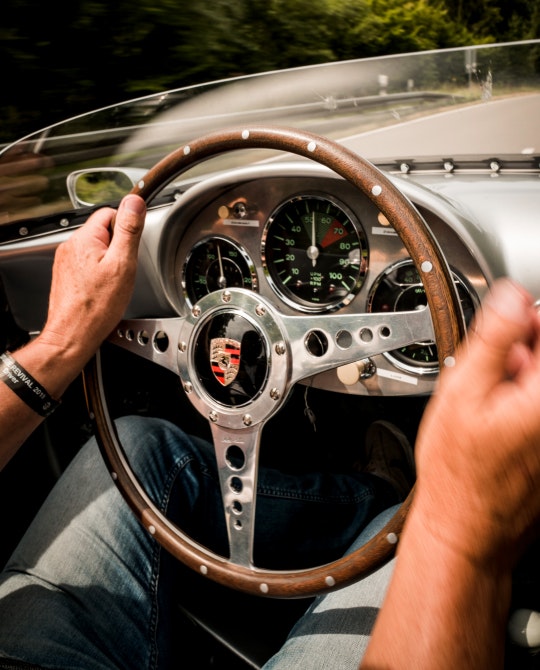 Let's get this show on the road: The Porsche rolls out of the protective tent somewhat sluggishly. Wait a minute: Quickly release the handbrake deep down in the footwell, nobody noticed the restrained start - hopefully. The four gears are easy to engage, even if the shifting distances used to be somewhat longer. We roll out of the paddock in front of the pits in a convoy. Beautifully renovated, the start-and-finish house is a reminder of the legendary times of this race track until 1965. Up to 400,000 spectators made the pilgrimage to the woods not far from Stuttgart. They occupied slopes, climbed trees. Route overview? Usually none. Porsche, Lotus, Ferrari, BRM. Jim Clark, Graham Hill, John Surtees, Innes Ireland, Graf Berghe von Trips, Dan Gurney - the audience called out the names. 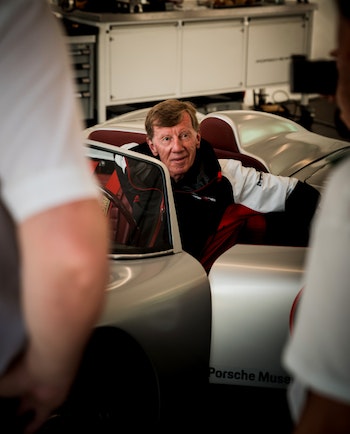 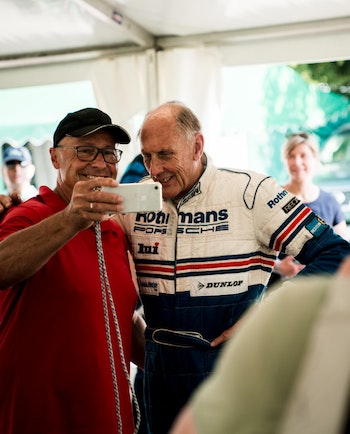 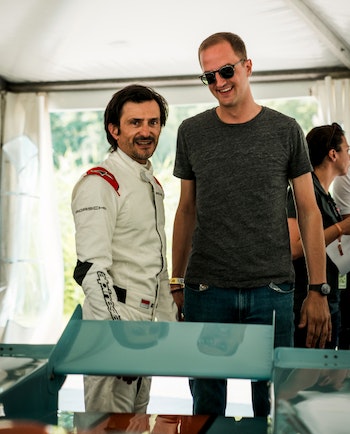 »A race track made for Porsche,« says Stéphane Ortelli today, »narrow, winding, uphill, downhill,« describes the Solitude newcomer his impression. The Frenchman won 1998 in Le Mans with the Porsche 911 GT1 98. I agree. As a kind of Solitude veteran, in 1964 I sat on a branch in Glemseck to be able to look over the heads of adults on the piste. That's where we're accelerating. But what's going on now? The field around me is really accelerating! Oldtimers my ass, slow upshifts with intermediate clutches. Intermediate throttle at downshifting is part of it anyway. Two Solitude winners are ahead of me. I mean the cars, the Porsche 804 Formula 1 and the 718 Formula 2, from the years 1962 and 1960. During the great Solitude era, the drivers have either not yet started their careers like Hans-Joachim Stuck (born 1951) or have not even been in the world like Marc Lieb (born 1980). At Le Mans they both won, Stuck in 1986 and 1987 with the Porsche 962C, Lieb in 2016 with the Porsche 919 Hybrid. 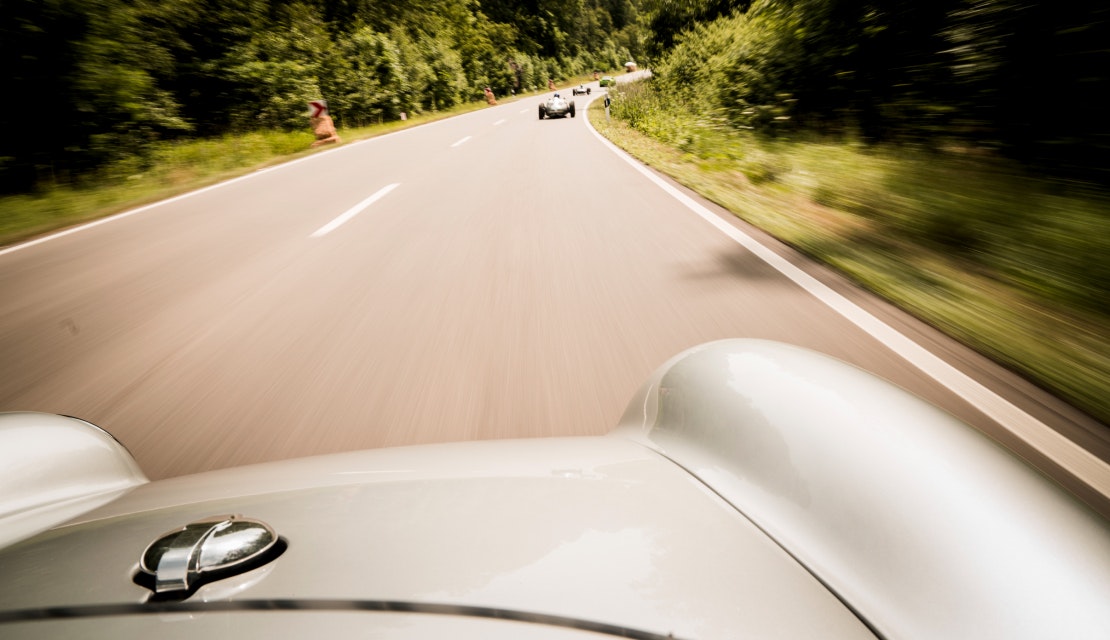 On the long straight in front of Büsnau it gets too wild for a two-time World Rally Champion behind me. Walter Röhrl passes by with the Porsche 718 RS 60 Spyder. The 550 Spyder has over 5000 rpm, the speedometer shows 150 km/h, the car could go faster, the driver hesitates. Then it becomes completely surreal. Stéphane Ortelli overtakes me with the Gulf-Porsche 917! Good thing photographer Kirill's in the 550 Spyder with us. He can bear witness to this scene that is hard to believe. The dot in the colourful programme of the Solitude Revival is called »Herbert Linge Special run«. Linge is 91, he doesn't drive on this track himself anymore. Different from trips around his home town Weissach with his own 911 Targa. »At the last Solitude race in 1965 I finished third with the Porsche 904, it was the one with the six-cylinder engine.« Linge remembers exactly. The racing driver, who started as an apprentice at Porsche in 1943 (!), is also fully involved in 2019 and always in conversation. A core sentence: »Motor sport has been with me all my life, so I can't switch off and say that I'm not interested in it anymore.« 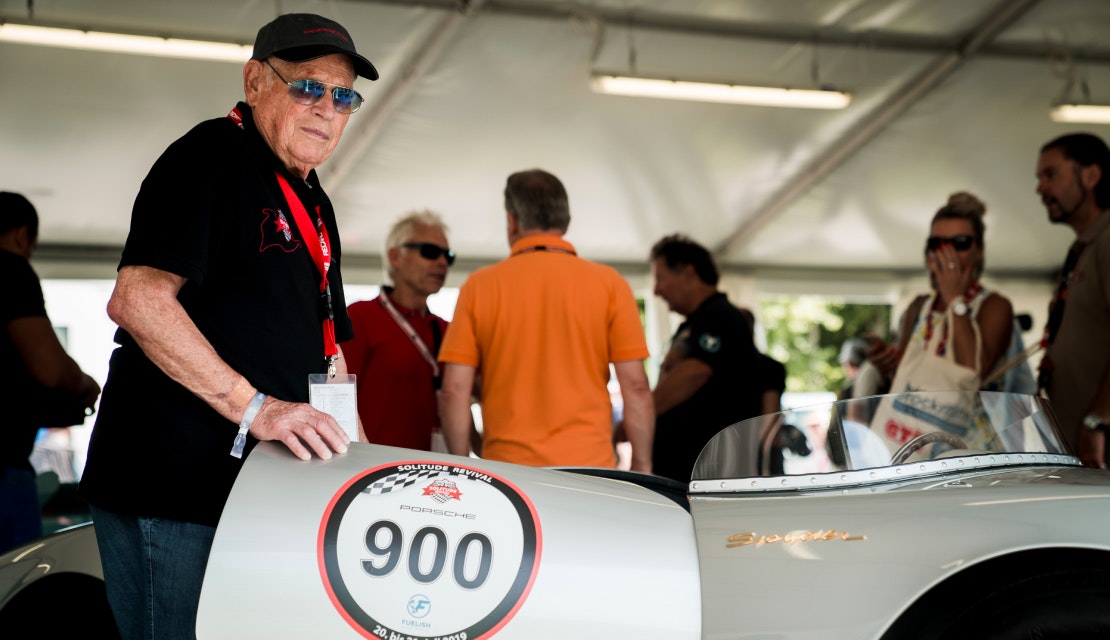 Hans Herrmann/Herbert Linge won the class at the Mille Miglia in 1954 with the 550 Spyder. Porsche's first car specially developed for racing was presented at the Paris Motor Show in October 1953. Soon after its debut, the 550 was given the name »Spyder« (light open carriage) borrowed from English coach building. The 550 Spyder was successful on many racetracks. The Carrera Panamericana 1954 has remained in memory. Hans Herrmann finished third behind two much stronger Ferrari in the overall standings at by far the fastest and toughest road race in the world at that time. Unforgotten also the death of the actor James Dean. On September 30, 1955, Dean was on his way to a race track in Salinas, California, after completing the shooting of »Giants« in Dean's private 550 Spyder. In public traffic, a Ford driver took his right of way. James Dean couldn't dodge it. 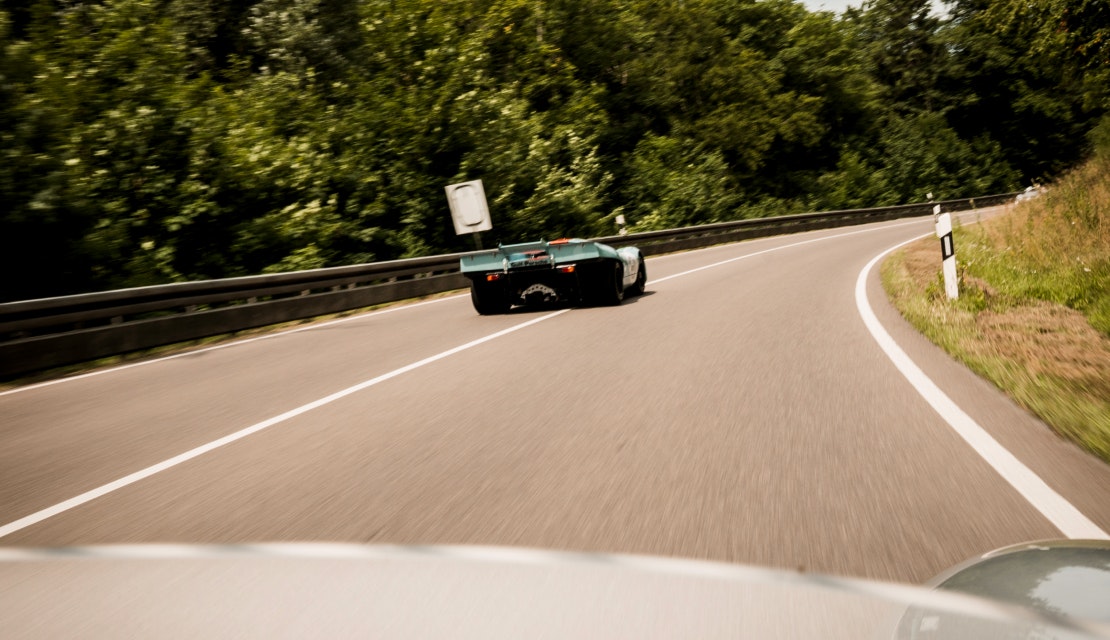 Solitude has no time for such thoughts. Braking for the curves at the Hotel Schatten. Then it goes down into the meandering curves of the Mahdental. Every turn is a bit different, sometimes the rear of the 550 Spyder waggles. Hold the gas as the gentlemen before me surely do? Better not. In the top right corner of the woods in 1962, I was at Dan Gurney's Formula 1 Porsche victory. My father found it boring that the racing cars could only be seen for one second at the most. He told me that decades later. I thought it was great! Only on the home stretch I see Lieb, Stuck, Röhrl and Ortelli again. The field is merged there. And then it's on to the next round...

Back in the drivers' camp Walter Röhrl asks me: »Michael, hope you’re not angry that I overtook you?« All good, Walter. 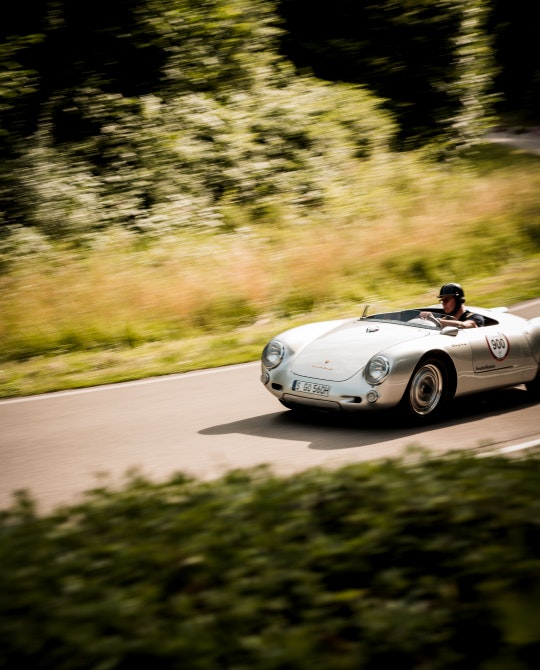 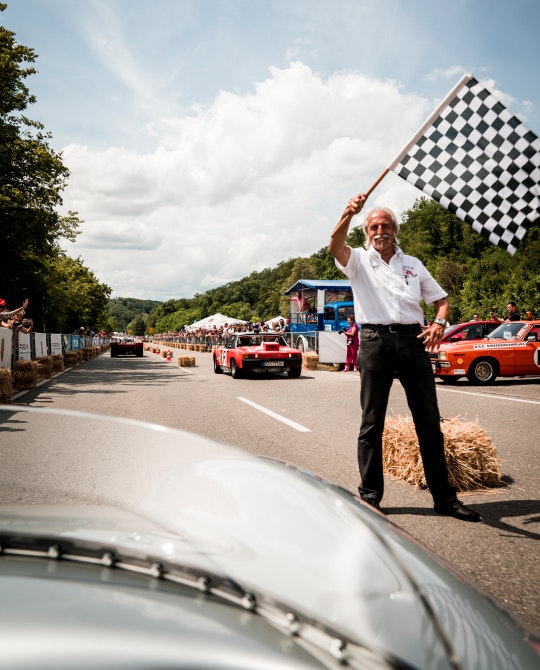