Bruce Brown is the man behind two of the most important documentaries of the 60s and 70s. The Californian film maker created two epic motion pictures that still find their fans today; the surf movie »Endless Summer« and the motorbike film »On Any Sunday«. Their success was in no small part down to Steve McQueen’ financial backing but also his trademark driving skills.

»Hey, all you need is a good idea«, Bruce Brown laughs when I ask him how to make an iconic movie that lasts forty or fifty years – especially in short-lived times. »When you have a good idea it’s not that difficult to make a good movie«. Bruce Brown is sitting in his ranch near Santa Barbara, California, in one of those comfortable TV chairs that can be tilted backwards with a lever.

There’s a wooden longboard above the fireplace right next to an antique Winchester rifle. Brown is grinning, but he’s actually dead serious. His blonde locks and that Elvis-style haircut have thinned out, to say it nicely, while his Ray-Bans have given way to strong bifocals. His pants are no longer cut below the knee but now sit high above the waistline, a bad habit with seniors around the world, and one that’s made slightly better by Brown preferring Hawaii shirts that graciously camouflage the belt area.

Who the hekk is Bruce Brown? 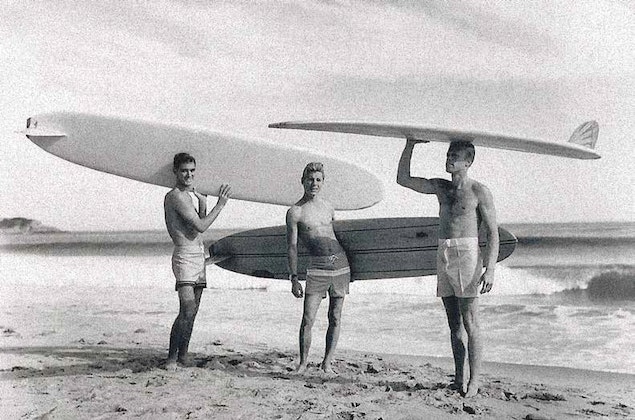 Only few Americans remember his name, even though two of his movies have changed the cultural fabric of the United States forever. In »Endless Summer« - which is considered the surf movie of all times – a good-looking 27year-old Bruce Brown (with a full head of hair) and two of his surfer friends are chasing the perfect wave; from San Diego to the South African coast, from Australia to New Zealand.

»On Any Sunday« is Brown’s 1971 sweeping portrayal of the world of crazy American motorbike racers and has served as a monument to his skills. It’s been almost 50 years since then, and still Brown’s »Sunday« is considered a leading documentary about everything people with a stopwatch, a (very) long measuring stick and two wheels can come up with. Ok, while »On Any Sunday« got nominated for an Oscar, it missed out to a movie about killer bees, go figure. That didn’t keep the young Californian from filming »Endless Summer II« and quite a number of »On Any Sundays« after that, with a few »Baja 1000 Classics«, »Golden Years of Surf« and »The Edges« in the mix.

It’s easy to see where young Bruce Brown was heading but none of his later works rivalled the iconic status of »Summer« and »Sunday«. But still, in times of X-games, Jackass movies and 70-second boogie board washouts on YouTube, the old fighter is still going strong. »I am always astounded what they are doing these days. When we made Sunday, the trials meant we were crossing over logs. Today, they’re jumping over houses, and motorbike races are million-dollar affairs. In the old days, motocross was a Levi’s, a T-shirt, and a helmet. Back then, nobody had any money, now they all have sponsors and huge trucks«.

Well, yeah, in the past, they just met a few friends and hit it, but then the money came, and motorbike racing evolved into just another job. 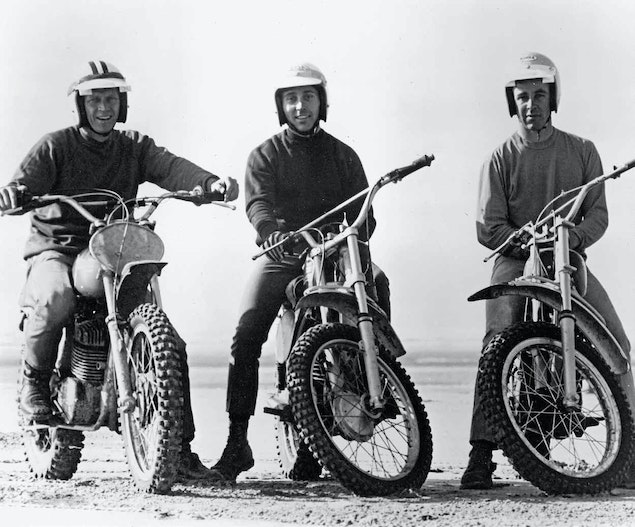 What sounds like nostalgic pity of an old man attempting to tear his hair out – of which precious little is left – and just more talk of how everything was better in the old days, turns out to be more bewilderment about so many of his fans sticking with him.

»All I wanted to do is make a film about my love of this sport and show people what makes motorbike fans tick«, says Brown. »I wanted to show my fascination for motorbike racing and make it tangible for everyone by giving the sport a legitimate base bringing it more attention and more fans«.

Before »On Any Sunday«, bikers were seen as noisy, while surfers – before »Endless Summer« - appeared as lazy punks. Outsiders in a society characterized by the Vietnam war, Nixon, and his »silent majority«. To Brown’s credit, nowadays both sports enjoy a much higher acceptance in the American mainstream, lawyers can be bikers, while hedge fund managers can very well pull out their board early in the morning and hit the waves in Malibu. More than that, without the many endless summers and those half a dozen Sundays, there would likely be no X-games and no extreme sports – Red Bull would have to invent them. But still, Bruce himself finds the level of his own pioneering and evangelism for the sport a bit scary. »I’m fascinated to no end«, he says, »that people see me as the Godfather of extreme sports«.

Grandpa Brown seems to have earned the respect of later generations, and neither grandpa nor the word respect is meant as a joke. When »Surfer Magazine«, that accurately but also very unoriginally named bible for American surfers, produced a story a few years ago about the most influential surfing personalities in the world, Bruce Brown, his son Dana and his grandson Wes were featured on a double-page spread. Hawaiian surfing pioneer Duke Paoa Kahinu Mokoe Hulikohola Kahanamoku, who passed away in 1968, had to make do with just a single page, with his name taking up half of it.

There’s a certain element of Bruce Brown’s fame and fortune that’s surely down to Steve McQueen’s participation. »I met him for the first time in his office at Solar Productions«, his former protégé remembers. The superstar’s penchant for anything driven by a combustion engine – and preferably very fast – was no secret in Hollywood. So, Brown called him one day to see if he felt like putting up a few dollars for his motorcycle project. The studios were not keen on seeing their big asset risk life and limb racing at high speeds. Steve, on the other hand, was only too happy to rebel against such tight regulations which, it has to be said, didn’t really harm his public image at all. Instead, he continued to drive as fast as he could with anything he could get his highly paid hands on. »He told me that generally it was him getting paid to be in a movie. ›I don’t pay to be in a movie‹. But then a day later he called and said he wanted to be in«. Two very public rebels had finally found each other.

Steve advanced the production budget for »On Any Sunday«, no matter what Bruce Brown had asked for. As one former employee of the Hollywood Reporter remembers the deal, McQueen would have financed the entire movie production right from the start, but Bruce only ever asked for what he needed for the next days of filming. 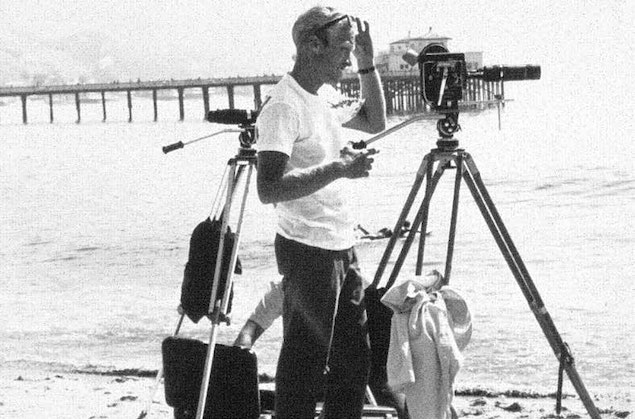 »Entirely unusual by Hollywood standards«, the journalist recalls. »But Bruce Brown was never even close to being one of the ›Hollywood crowd‹«. McQueen’s only condition was that he would be participating as one of the bikers; he’d even bring his own bike – thank you very much! – even two, if needed, but he wanted to drive. To keep the fans from storming the set but also to keep the studios somewhat in the dark, Steve McQueen entered using the pseudonym Henry Mushman and drove for ten minutes up and down sand dunes and across racetracks. A reuse that only worked for so long, as Brown held his camera on his star for as long as he felt appropriate.

Dirt and mud and mud and dirt, followed by more dirt and mud. This is how Bruce Brown remembers the shoot. »But we had a lot of fun, too«, Brown recalls, »Steve was our cheerleader. He was always in a great mood, a really wonderful colleague«. Steve showed none of what Brown calls ego fussing, he wanted no say in pre or post production. »He didn’t actually want to know what we had in mind, just tell me where I need to be, was everything he said. Steve just wanted to ride his bike«.

Which was more or less exactly what Bruce had on his agenda. There wasn’t a script as such, nor were there exact shooting schedules. »Shortly before we started filming, I had written down a few things which I had forgotten as soon as we were on the track«, says Brown, still sitting in his comfortable chair. There was no art department choosing the right T-shirts, the cast had to brush all of the dirt off their teeth by themselves. Even Steve made do without the usual row of assistants and hangers-on. Although, that has to be said, every morning Steve found his T-shirt washed and nicely ironed, admits Brown. They were also spared of make-up artists, but who would he have used it on, anyway? Also, he adds, the bikers initially did not see him as one of them and ignored him. »None of the drivers respected me« he says while leaning far back in his chair. »Until that one morning when I put on the helmet camera and crossed the motel lobby completely naked«. From that moment on, the drivers respected him which admittedly casts that whole 60s biker scene in a somewhat odd light.

Today he isn’t bothered much about filming anymore, he reveals. His son and grandson have taken over in that regard. For a while, he used to attend rallies on the West Coast together with his wife as copilot, and restored old cars and motorbikes. But now his health has deteriorated a little, the hips got slightly wider, the knees are really hurting – something that makes motorbike riding a pain, literally. He hasn’t been on a surfboard for a long time. »When my wife got diagnosed with cancer, I wanted to be there for her. And when I was ready to go back on a board, I was so out of shape that I was afraid I’d kill myself out there« Bruce admits without a hint of regret. »I’ve taken all the good shots already; I’m done with it«.

Bruce Brown passed away in December 2017. He was 80 years old. In his obituary, the New York Times called him »the unofficial poet of the sports world«.

In the old days, motocross was a Levi’s, a T-shirt and a helmet

Well, what is style? Everyone has their own personal taste. White socks with a gray suit, is that a style or is it square?

»None of the drivers respected me «, he says while leaning far back in his chair. »Until that one morning when I put on the helmet camera and crossed the motel lobby completely naked«. Steve McQueen didn’t actually want to know what we had in mind, just tell me where I need to be, was everything he said. He just wanted to ride his bike.

»I’m fascinated to no end«, he says, »that people see me as the Godfather of extreme sports«.