Holidays? Are for quiet contemplation. Usually not what you think of, when we talk about about a parking garage. But there is one car park in Stuttgart that actually meets this description. We spent some time there – and broke the silence with a Porsche Speedster.

Car parks are places where you can park your car. They’re not designed to be aesthetically pleasing or to function as representative buildings. They’re built exclusively for a specific purpose, which makes them examples of functionalist secular architecture, or profane architecture, as it’s sometimes called. At least that is how geographer and urbanist Jürgen Hasse describes them. He wrote a sociological study investigating the history, cultural significance and heterotopic status of car parks. Hasse’s book is about places where you’re unlikely to linger any longer than absolutely necessary – they’re just too tight, too dark and usually also overpriced and crammed chock-full of cars whose owners seem to follow the “two are better than one” doctrine, especially when it comes to choosing parking spaces. 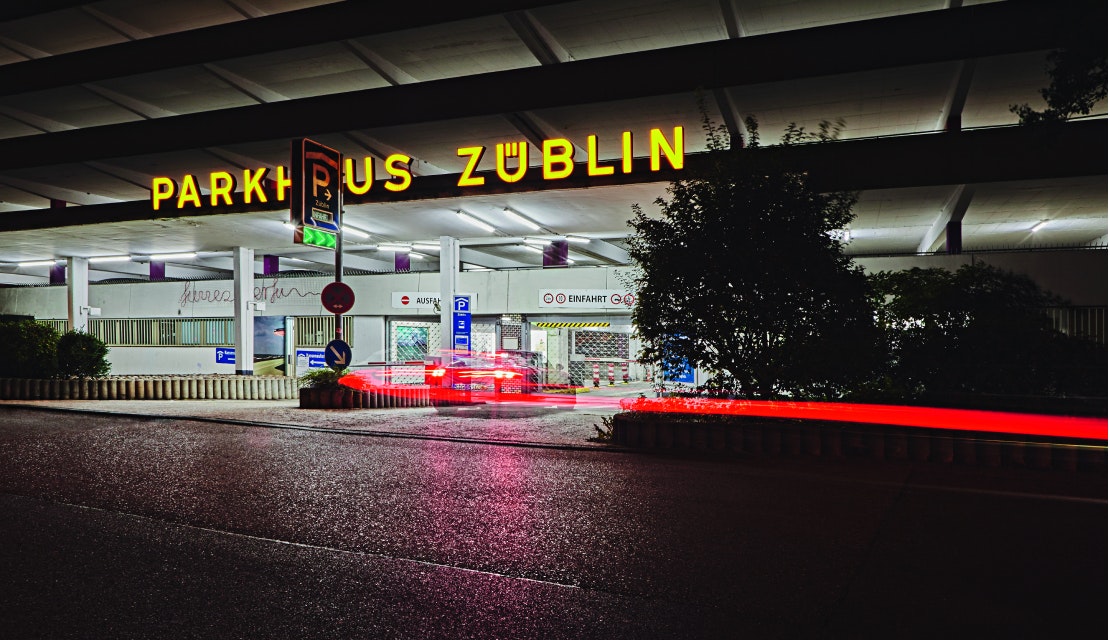 But car parks haven’t always been like that. As Hasse points out, multifunctional car parks were extremely popular especially in the 1950s and 1960s. These buildings provided not only parking spaces for vehicles but also included gas stations, car wash facilities, hotels for tired drivers and sometimes even casinos. I’m not joking. At that time, the car was celebrated as a symbol of technological progress and economic growth. With their holistic approach, those early car parks reflected the central role the car played in people’s lives.

And today? Well, you could say that parking garages have become places without character. Or places with a character that is so off-putting that you simply don’t want to spend even a minute longer than necessary there. They’re the architectural equivalent of a really bad mood, a building whose main job is to hide unpleasant things behind its walls – which gives the whole place itself an unpleasant vibe. But there are exceptions. Recently, I came across such an exception by chance while driving a Porsche Speedster – which is everything but unpleasant. It’s a truly phenomenal car: 520 hp, a four-liter naturally aspirated boxer engine, manual gearbox, Indian red color, open top. Damn hot – which brings us back full circle to the profane, but I guess sometimes you just have to let it out. 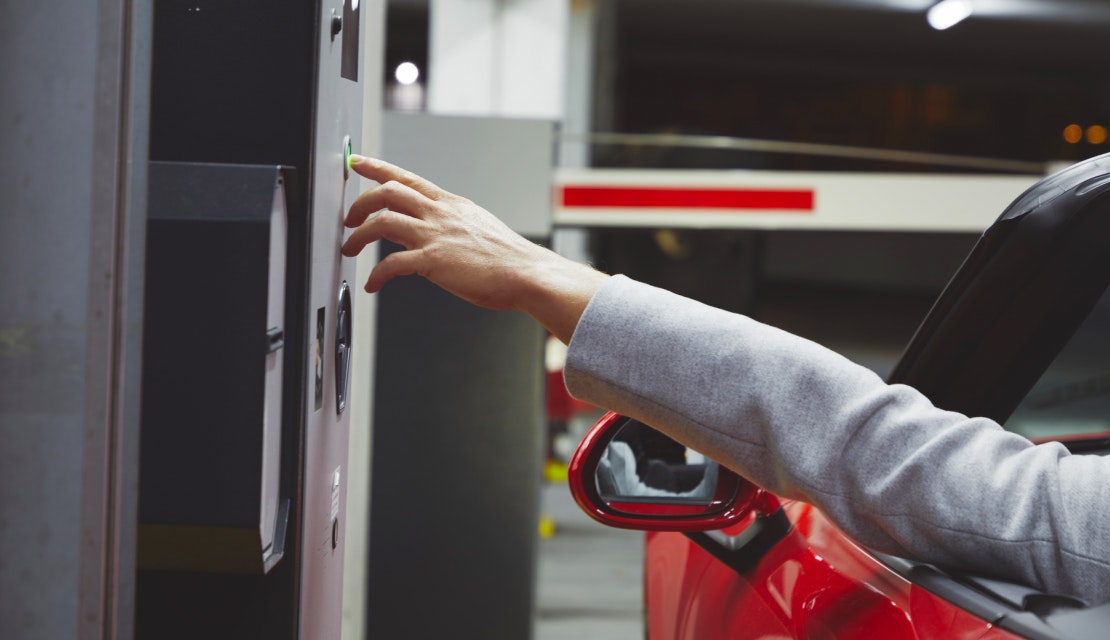 But, as I was saying, I was out “testing” the Speedster in the Stuttgart area one Sunday evening. It wasn’t about determining the car’s acceleration and braking performance or its fuel consumption compared to earlier versions or rival models – there are others out there who take care of that. It was more about discovering the vibe and the spirit of the car. At ramp, we call this “looking at the big picture”. As I was cruising along Theodor-­Heuss-Allee, I remembered that an old friend of mine had told me to check out “the Züblin”, a parking garage right in the middle of Stuttgart’s usual traffic mayhem, right around the corner from the city’s infamous particulate matter measuring stations.

Now, why would anybody in their right mind want to go to such a place in a high-end sports car? Because the people running the Züblin have come up with a special idea to shake off the drab image generally associated with a car park: they combine parking and art. Driving through this huge parking garage is actually quite a unique experience. Don’t get me wrong, the basic architecture of the Züblin car park is exactly what you’d expect – it’s as charming as a prefab concrete tower block from the seventies. In a piece published nine years ago, the local daily Stuttgarter Nachrichten labelled the building an “architectural crime”. 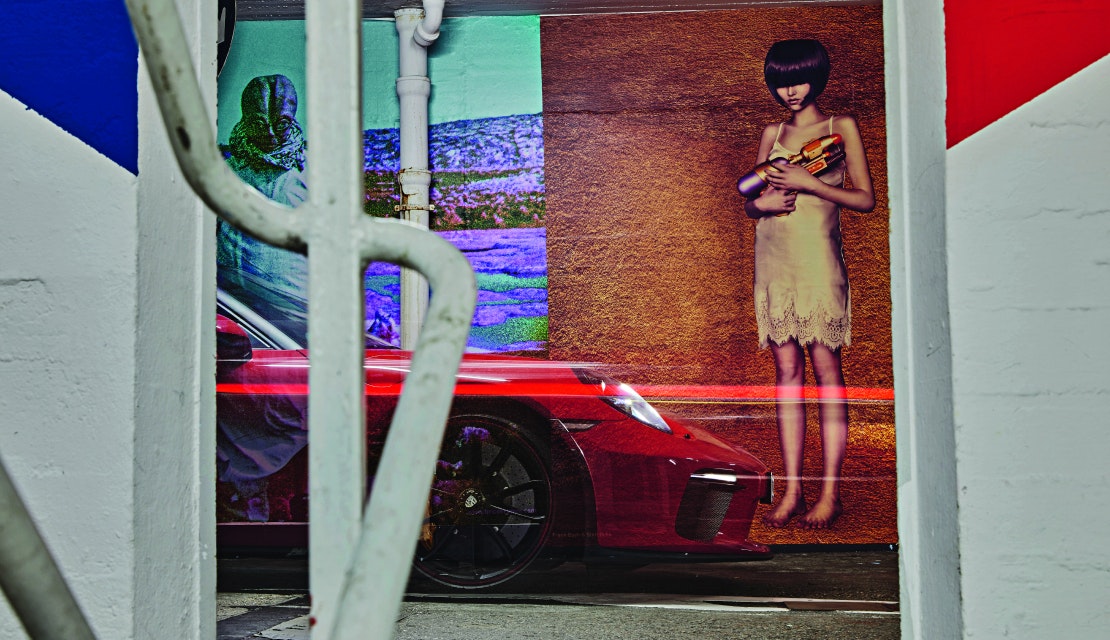 Usually, the bland white walls of a car park are only adorned by the black marks left by drivers with a less than stellar sense of spatial orientation. But here it’s different, here the walls are covered with huge photographs and collages. You see girls holding water guns right next to aliens, a group of naked people lying on the floor, some of them on top of each other, and some clothed people marveling at a rocket. In the staircase, there’s a photo of a smiling young woman. You can only see her when you look closely and peer through the narrow corridor. She wears short, blue hair – a wig, no doubt –, blue lipstick, and only a blue feather boa to cover her slender body. I bet that the location of this particular photo is the result of some serious strategic thought, aimed at preventing rear-end collisions. 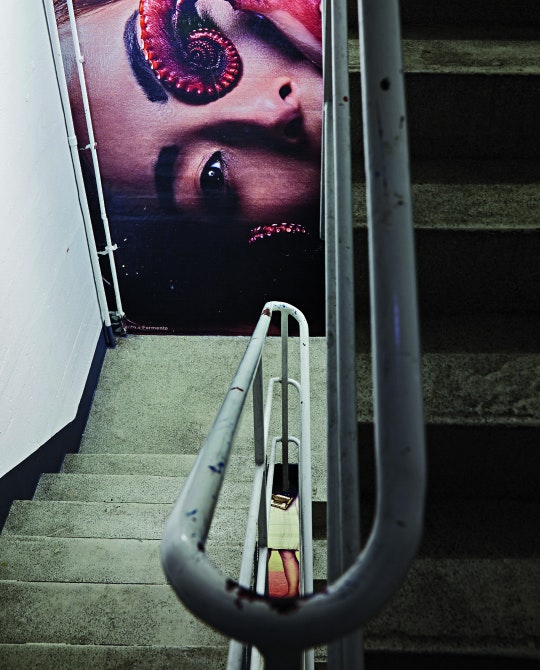 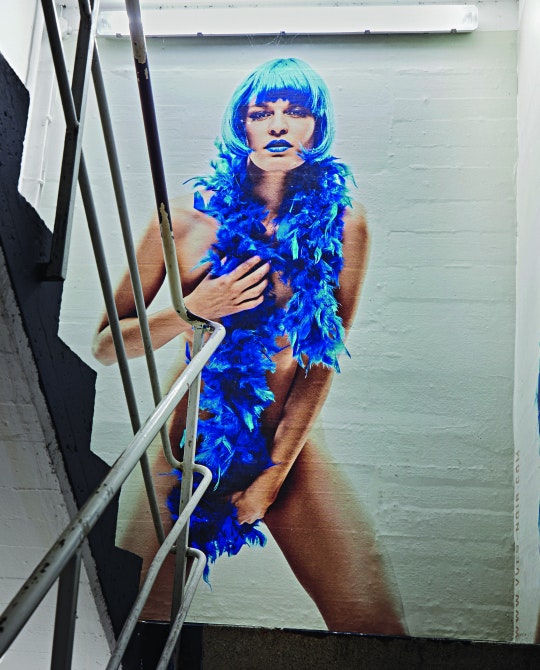 Fortunately, it’s not very busy here on a Sunday evening. I can take my time and explore this unusual gallery. While I’m driving through the empty parking levels, I realize that I’m driving the perfect car for enjoying a drive-through art museum. The top is open, even though it’s autumn. That’s because someone who drives a Speedster couldn’t care less about banal matters such as the seasons. Dry, or not dry, that is the question. And the answer is not as straightforward as it may seem. For example, you only have to drive fast enough so the raindrops can’t hit you anymore. 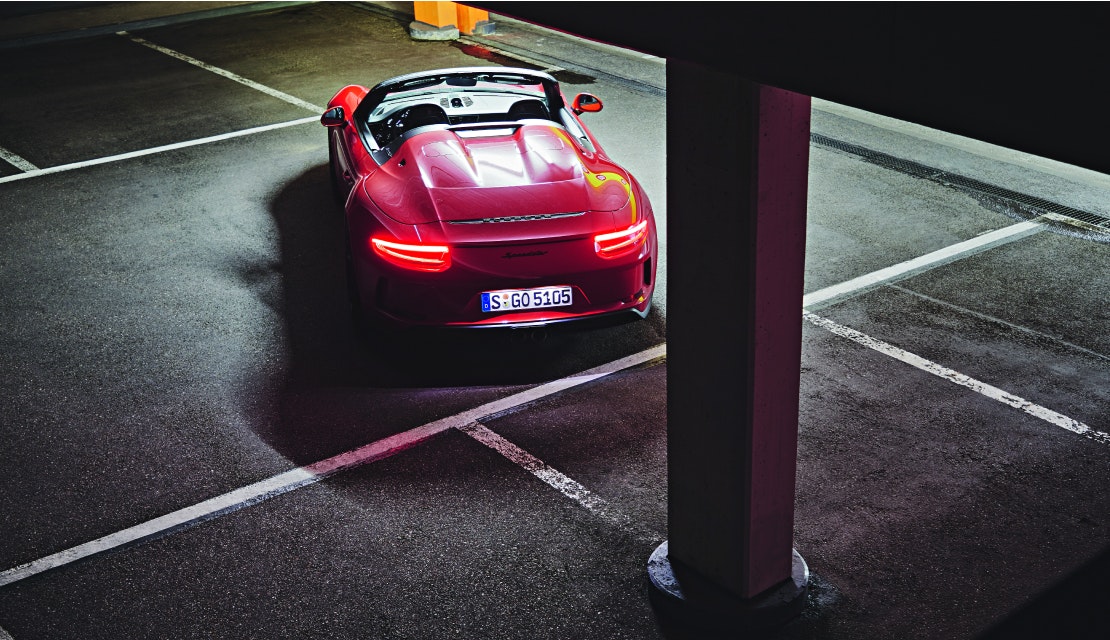 Luckily, I’m safe under the roof of the car park and don’t have to resort to such extreme measures. The open top is only an advantage here, affording me a completely unencumbered field of vision. It’s almost like riding a motorbike, except that this car saves you the hassle of having to put your foot down every time you stop for a second. And there’s another reason why the car is so perfectly suited to this place: in a sense, it’s a work of art in its own right.

The Speedster has the characteristic double-bubble streamliners on the top lid, deviating from the iconic shape of the 911, and a GT3 RS engine that delivers enormous power – and the appropriate sound to go with it, of course. A monotonous, metallic melody that seems to be singing an ode to the car’s mechanical and technological sophistication, the fruit of decades of continuous refinement. I step on the accelerator, the revs go flying up and the melody jumps two octaves. I could easily make that five, but then I realize I probably shouldn’t. 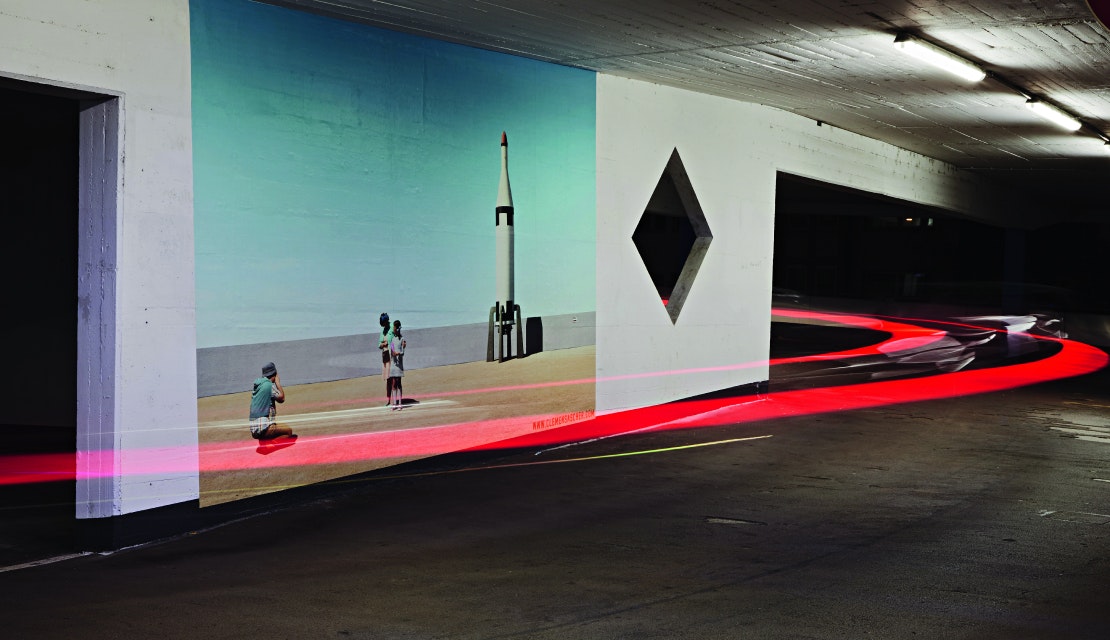 Bit by bit, the Speedster climbs up the car park’s tight spiral ramp. The sound waves hit the walls when I accelerate on the empty straights – carefully, of course. I drive by another naked woman. At first glimpse, she seems to be covering her ears. A socially conditioned pang of conscience starts to take hold of me, but then I notice that she’s just burying her face in her hands.

So I accelerate again. As the Bauhaus-inspired Spanish artist Max de Esteban once told me in an interview, “Art isn’t there to be understood.” But art can make us think, that’s for sure. When I reach the topmost level of the car park, I stop the engine and look at the sea of lights that is Stuttgart. The Züblin surprises and provokes me. It offers a change of pace, new and inspiring perspectives and opportunities for reflection. In this sense, it goes far beyond the level of the profane. It’s not an architectural crime, it’s art. 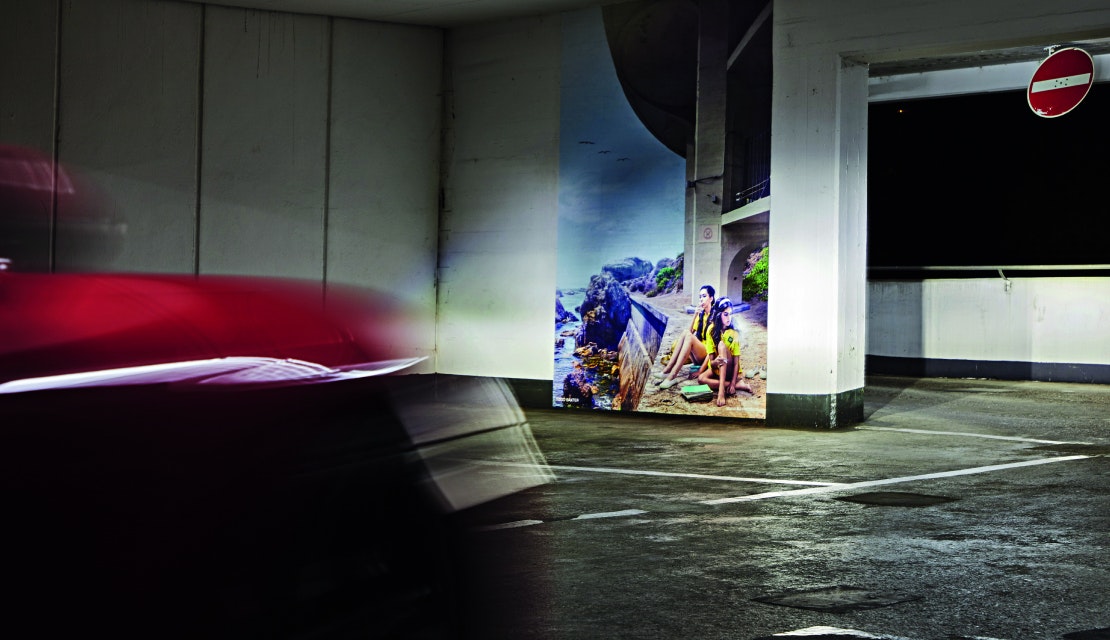 This story and many more adventures can be found in the new RE/CAP - Best for 2020. The book with all the finest tales of the first year of »Crazy about Porsche« is available in the shop of ramp.space.