So now we hear movement

With the Taycan 4S, Porsche is making its entry into electric mobility extremely dynamic. This stimulates a mind-expanding journey in times of new beginnings.

To perceive silence, you sometimes have to listen very carefully. The absence of aircraft noise? The almost zeroed out background noise of the main road at the other end of the residential area? It sometimes takes a few days, if not weeks, to register such changes. Such a lockdown is a wonderful way to put your receptivity to the test.Because once you have discovered it, the silence, you realize that it is not so silent. This is perhaps because people do not even identify natural sounds such as the rustling of leaves, the splashing of water or the singing of birds as sounds, but rather perceive them as part of the natural cosmos. US acoustic ecologist Gordon Hempton therefore calls silence the absence of the soundscape of a modern world. My neighbor, on the other hand, already finds it extremely quiet when the V8 of his pony car just bubbles along with pleasure instead of hissing grimly.

»It is a question of perspective.«

The Taycan 4S contributes another perspective. When Porsche's sports sedan approaches, crouching flat, the silence inevitably comes to the fore. You can practically hear that you don't hear anything. Not in the acoustic-physical sense. Rather, the automotive ensemble of sporty looks and self-confident soundscape, which was learned over more than a century, is dissolved here into pure movement. It becomes exciting when you encounter the Taycan 4S not casually gliding along in a residential area, but in one of its natural biotopes. A mountain pass road is a good choice. So when such a Taycan 4S traces the lines of the Grossglockner High Alpine Road or the Bernina Pass in rapid turns, the brain of the distant observer inevitably starts to build up its own background noise. 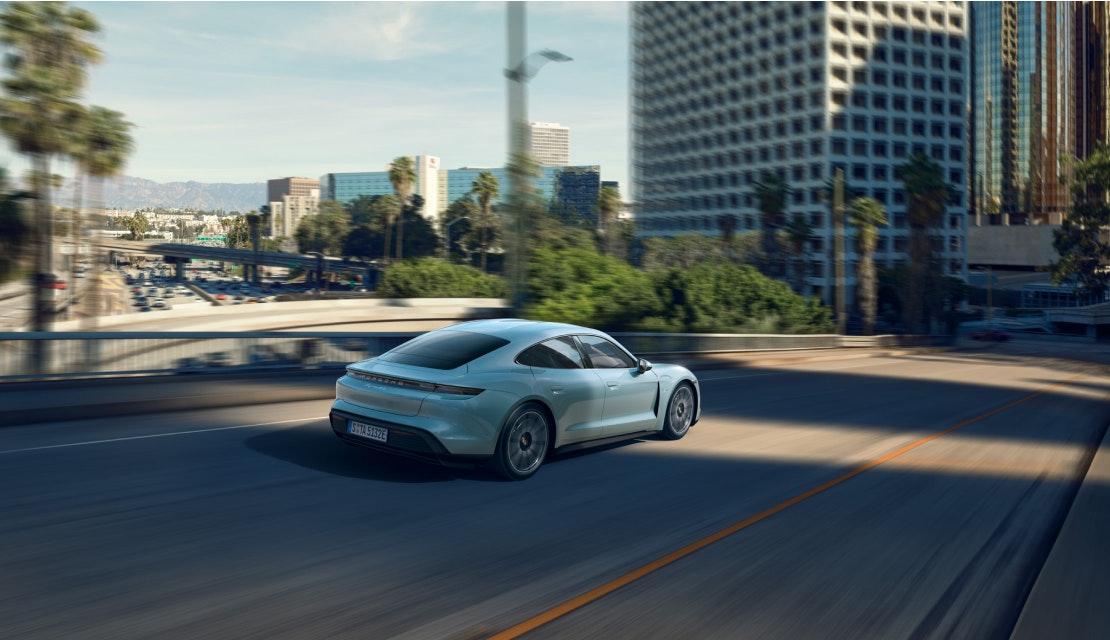 Synaesthetes are able to do this almost perfectly, i.e. to mix different senses with each other. They hear colors or smell words. Sounds like extrasensory esotericism, but it is very real. In an experiment at City University London, for example, one in five test subjects translated flashes of light into sound even though nothing could be heard. The psychiatrist Markus Zedler describes this ability as »a variation of evolution that allows consciousness to generate more information by linking the senses and coupling them with emotions.« In a nutshell: The brain is better connected.

»So now the Taycan 4S lets us hear something that is not there at all. Not bad for a sports car.«

The consciousness-expanding effect of sports cars has so far been related more to adrenaline-pumped states. The Taycan 4S can easily do this as well. Depending on the battery equipment (performance battery or performance battery plus), 530 or 571 HP are available. With these, it launches its 2.3 tons of live weight from zero to one hundred in four seconds or from 80 to 120 km/h in 2.3 seconds with the help of Launch Control. In addition to that, it performs lively pirouettes on prepared ice or meanders almost light-footedly through summer roundabouts. Porsche 4D Chassis Control is the name of the integrated chassis control system. All chassis systems are analyzed and synchronized in real time. In this way, they optimize driving behavior. Added to this is the electronic damper control system Porsche Active Suspension Management (PASM). The system reacts equally to the condition of the road and to the driving style. Damping is continuously controlled for each individual wheel. The Porsche Dynamic Chassis Control Sport (PDCC Sport) active roll stabilization system works with electromechanical stabilizers. If necessary, the system reacts within milliseconds. 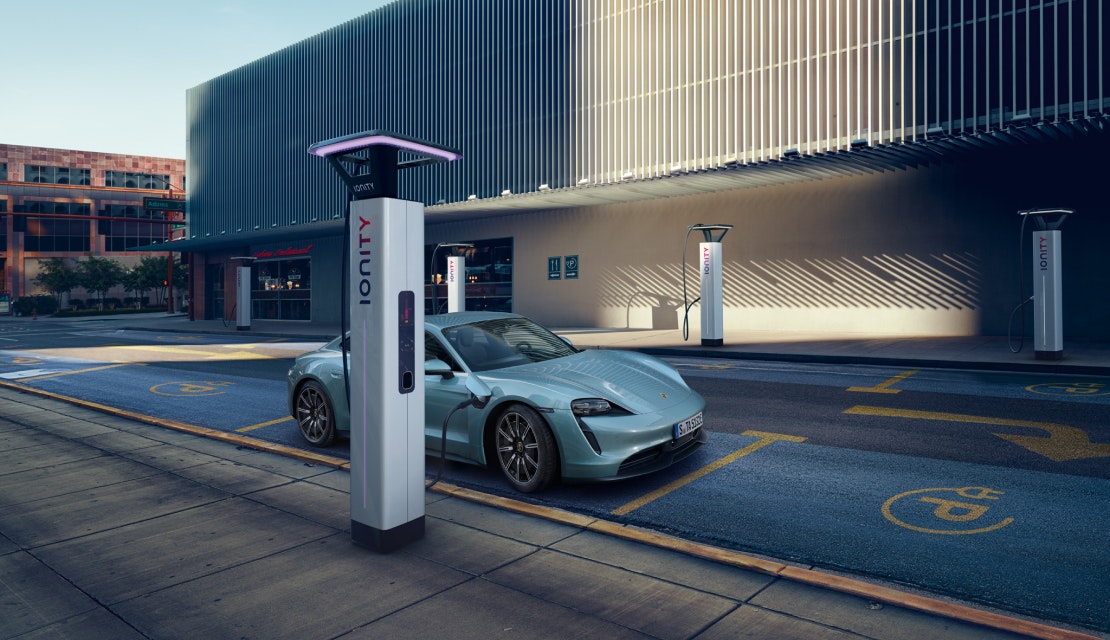 Added to this is the rear axle steering. Up to around 50 km/h, it acts in the opposite direction to the front wheels and thus produces more dynamic steering response in bends, while at high speeds it works in the same direction as the front axle. The wheelbase is extended virtually, thus achieving even greater driving stability, for example when changing lanes on the motorway. The fact that the batteries installed in the underbody result in a particularly low center of gravity of the vehicle, which is even lower than on the 911, is also no mistake. So far, typically Porsche. But the true expansion of consciousness takes place in the concept itself. Porsche reinvents itself completely - both with standard on-board equipment such as the sophisticated chassis technology and with completely new concepts such as the 800-volt architecture. This not only speeds Taycan up rapidly at the charging station - from five to 80 percent in just over 20 minutes - but also ensures a faster flow of energy between batteries and engines with reduced heating. Peak power levels can therefore be repeated almost as often as required without the electronics powering down due to overheating.

The fact that the designers have invented so-called foot garages between the lowest possible battery blocks for the guests in the rear not only helps to provide headroom, but also enables the proportions typical of a sports car and the flyline so typical of Porsche - the roof line sloping backwards. The Taycan nestles flat on the road. Like a cat of prey just before the jump. Tense, taut muscles, trimmed for efficiency, always ready to look at the jump.

»It hisses again from across the street. The Pony Car demands attention.«

The Taycan 4S skillfully ignores it. It doesn't really have to prove itself anymore. Its two bigger brothers have already done that. With Taycan Turbo and Taycan Turbo S Porsche has placed the ultimate in performance on the market at the start of the electric era. 560 kilowatts in overboost mode catapult the Turbo S to 100 km/h in 2.8 seconds. This is what the take-off of a jet plane from an aircraft carrier must feel like. The little brother doesn't need to go all out like that anymore. It knows that he can still leave just about any other road user behind him with ease. So if you do the whole thing as a family constellation, it is allowed to develop freely depending on his social environment, the intensity of parental love and so on, which can be very beneficial for developmental psychology in times of upheaval and a new start. 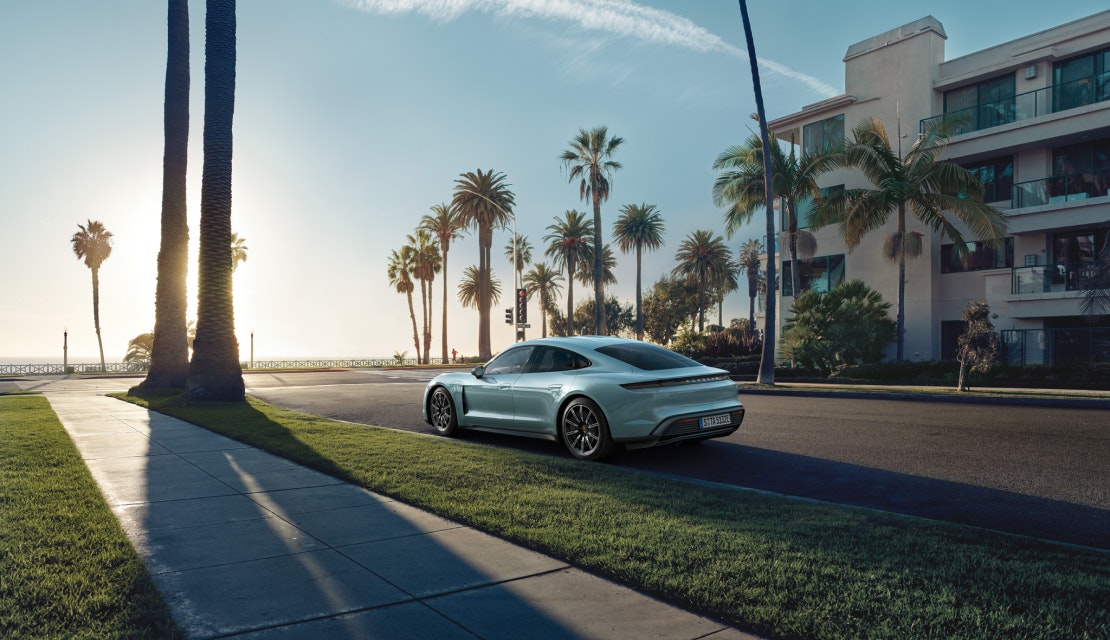 It was therefore certainly no coincidence that the Taycan won both the title of »World Performance Car« and »World Luxury Car« at the »World Car of the Year Awards 2020«. Today, the Taycan is thus fulfilling at Porsche what it already winkingly applied for the 911 in the early 1990s. Back then they said: »You can have a longer breakfast. You’re back earlier for dinner. Is there a better family car?« There's plenty of room in the Taycan to get a family of four anywhere in no time. Luggage included. Due to the type of propulsion even »Fridays-for-future« experienced children will not rehearse the rebellion, but probably on the contrary, will be proud of the sustainably thinking parents.

That still leaves the thing with the silence. Up close, it is not quite as silent as the environment in times of lockdown, even with the Taycan. In the sound laboratory at the Porsche Development Center in Weissach, engineers have been working for years on the sound of electric mobility »made by Porsche«. It can best be described as a mixture of a starting jet fighter and a fully accelerating ICE train. Or a bit of a spaceship after all? In any case: immensely powerful, with a clear statement on e-propulsion. You do not even have to try too hard to listen. All receptors are wide awake. 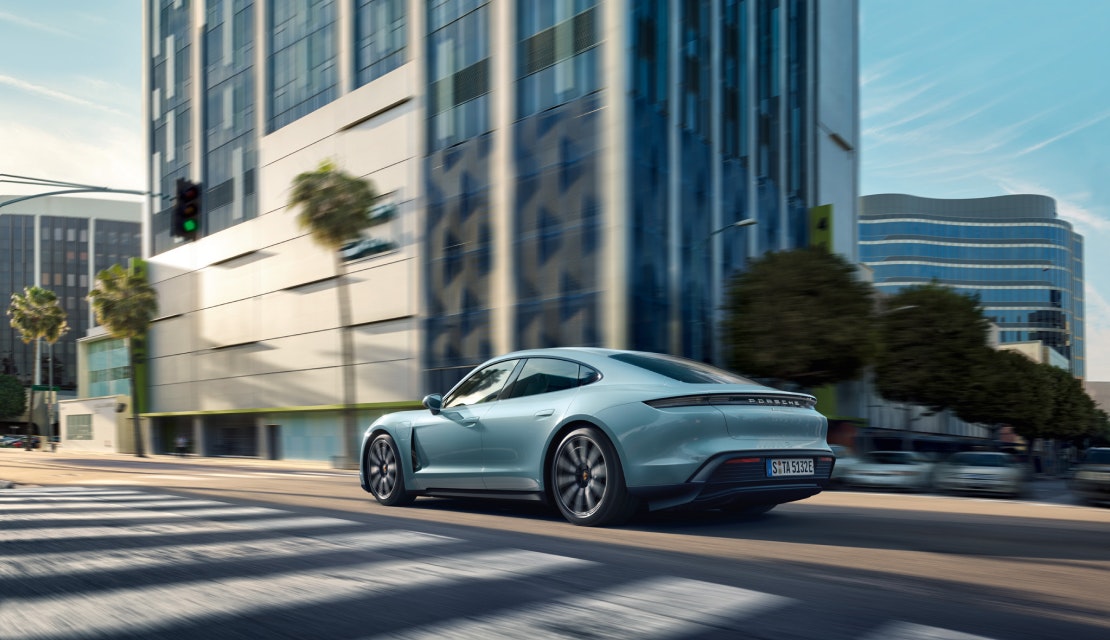