Silently the lake rests, not quite quietly the E accelerates

Turn of time. The Taycan is the first fully electric Porsche after more than a hundred years. During an excursion on Lake Garda, we look for answers to the most pressing questions about the car of the present and the future.

There on the shore, in Riva del Garda, overlooking the tunnel where Daniel Craig alias James Bond delivered one of the best chases in Bond film history in a beautiful Aston Martin DBS over ten years ago, it suddenly appears, this question from Thomas Mann's »Magic Mountain«: What is the time? »17:40 o'clock. We have to go,« says the colleague dutifully, responding in harmony with Einstein, who once said: »Time is what the clock indicates.« According to this, we could actually go straight for it with this Porsche, content ourselves with the fact that it's a car. A very nice one, admittedly. And really fast! Well, it’s a Porsche. Through and through. But that would be too easy. In order to classify the Taycan correctly, you can't avoid dealing with the past, the present and the future of the car in general - but of course always with the big picture as well. And already, Mann's question on how to get started takes on a dimension that can no longer be answered with a glimpse of the watch (or today of the smartphone). Rather, time becomes a necessary idea of what all views are based on. To say it with Kant. 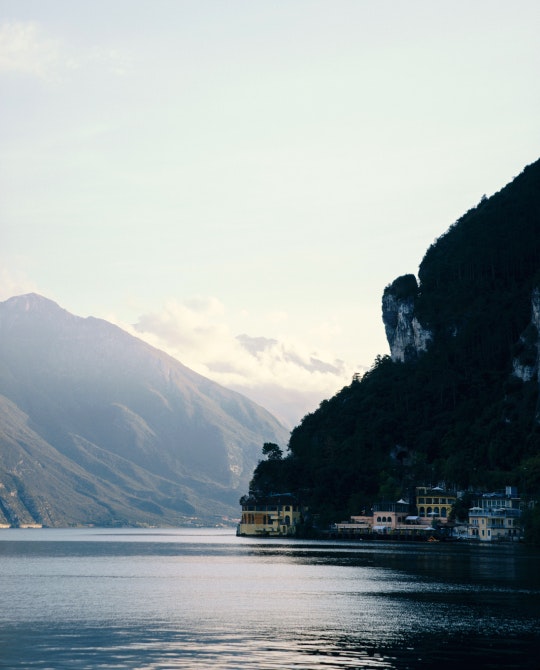 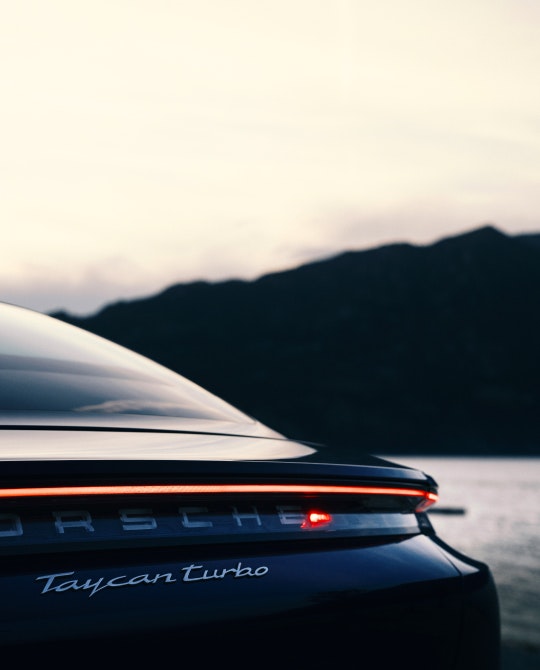 An example: Free roads around Lake Garda. Hardly any tourist believes that. The lake itself rests wonderfully quiet, the otherwise stuffed roads between the places Riva del Garda in the north and Sirmione in the very south offer us unrestricted travels. No matter if along the east or the west shore. But it is also the end of October and not the high season. Most of the boats are already firmly covered and lashed to the shore. It would be an outrage to tear this idyll apart by a car presentation. An exception of course is excusable. The presentation must be an electric vehicle. That's probably what Porsche thought. And invited us behind the wheel of the Taycan Turbo, which in the autumn sunset embodies the transition of a brand into a new era . 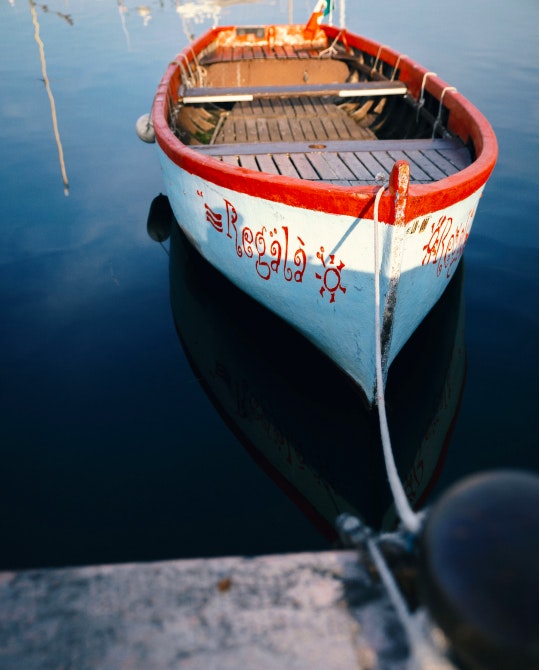 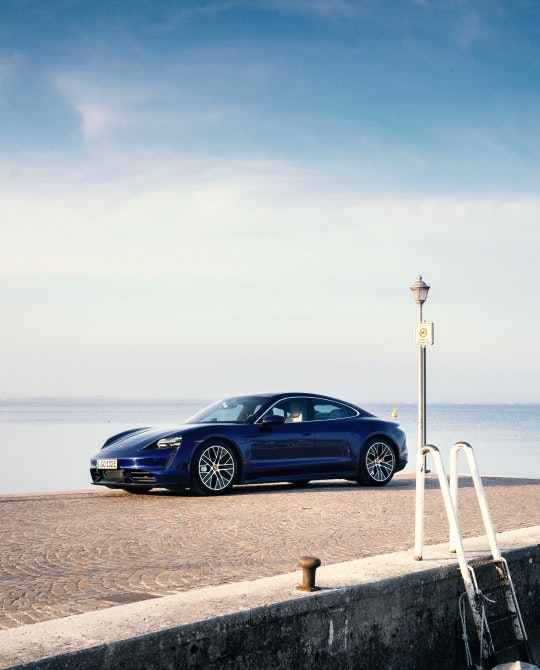 So everything is different? Let's wait and see. In any case, it begins unfamiliar: The right hand looks for something on the center console that reminds you of a shift lever, selector lever or anything else. In vain. The developers in Weissach are said to have discussed for a long time whether they really want to leave the center console so unusually tidy. Pragmatism has prevailed: A small switch to the right of the instrument cluster offers all the necessary variability: »Forward«, »Back« and »Neutral«. Oh well, the usual ignition lock on the left is missing, but there is a start button. At least. For the first kilometers in the Taycan these explanatory words are sufficient. Quickly up the switch for »Forward«, a light push with the right foot follows on the gas - no, pardon - it is now called the accelerator pedal. That's what the engineers call the trigger for the power.

Conclusion after the first few meters: I drive a Porsche. Banal. Perhaps I should be more precise: I feel that I'm driving a Porsche. Even those who try not to pay attention to everything Porsche-like, but only to the road, feel Porsche. The seating position is low and sporty, the handling immediate, the steering direct. Everything looks familiar. A little more pressure on the lower right, the car reacts without a hitch. After all, a turbo without turbocharger cannot have a turbo lag. Even though this has long been eliminated from modern turbochargers, the electric Porsche reacts even more spontaneously than any combustion engine. In between, a small rush for the summit. Serpentine follows Serpentine, there is hardly time for a look down at the ever smaller boats in the ever smaller ports of Lake Garda. 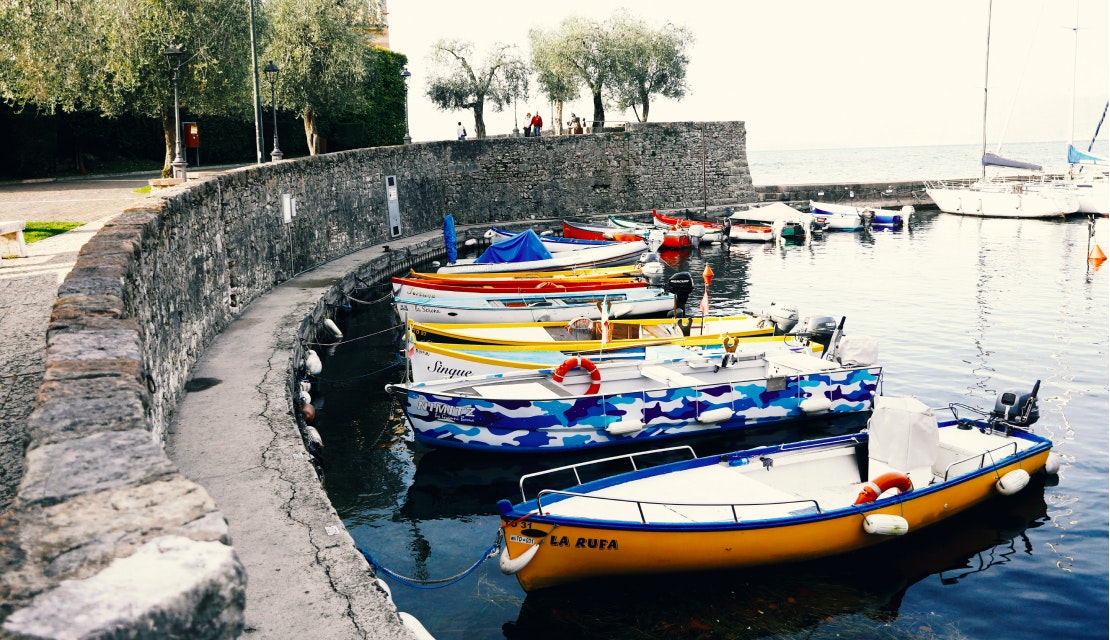 We roll out in front of a small bar. A few isolated guests. In spite of the missing engine sound all eyes are on it. »Is this the new E-Porsche?«, we are addressed in German. »Is it already available«, someone else wants to know. It's a quiet performance. During an espresso, the thoughts revolve around the crucial point, which is almost irritating. The sound is missing. To drive the Taycan like this feels so different, because the ear doesn't contribute to the assessment of the speed. It's clear that Porsche is concerned that some Taycan pilots underestimate the speed. Already in the LMP1 simulator of their Le Mans winner 919 Hybrid, the factory drivers have only achieved best times if the sound has been played to match the driving situation. That's why they thought of something in Weissach. With 499.80 Euro the »Porsche Electric Sport Sound« is on the surcharge list. The sound can be switched on. And now much, very much changes. Does the Taycan growl when stationary or does it hum?

Let's move on. What do we hear? Maybe a mixture of starting jet fighter and fully accelerating ICE Train. The sound is always powerful. With a clear statement about the electric drive. The sound is authentic. The engineers have highlighted the melodious sounds of the engine and gearbox and filtered out everything that sounds like a dentist's drill or tram. The sound is directed inwards, but also outwards. The acousticians assure that they can recognize a Taycan from afar by its sound alone. 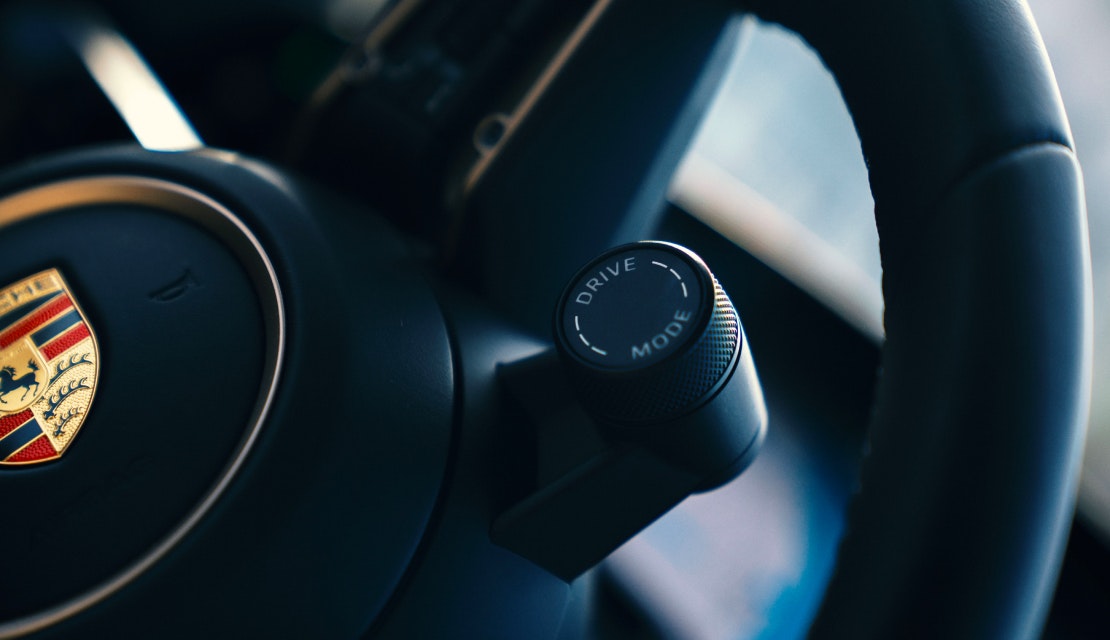 I never thought about the important role the ear plays in estimating speed. To put it in simple terms: Driving becomes much easier with sports sound on. Pure Porsche, now more than ever. Even a gear interruption is recorded, since the Taycan actually has two gears on the rear axle. But the first gear is only used for extreme acceleration, for example when starting with launch control, i.e. completely giving in to acceleration. The Taycan Turbo stands perfectly still. So far. The Launch Control is explained in the Taycan manual. Select »Sport Plus« with a switch. The left foot stands with force on the brake pedal, the right foot pushes the.... Accel.. Gas pedal all the way. I remember a tip: »Lean your head back against the headrest.« 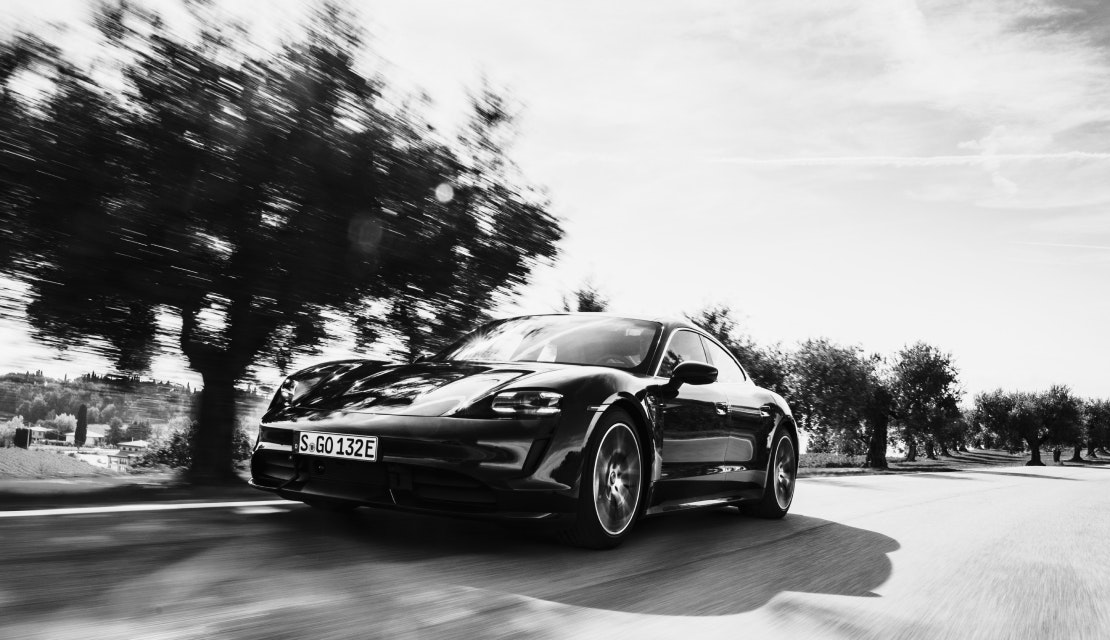 The foot suddenly lifts off the brake. What happens then is difficult to describe. The car hurries forward. So fast that I see the headrest as a milestone in the development of mobility. That's how the catapult launch from an aircraft carrier must feel like. The corners of the mouth pull upwards by themselves. Whether out of joyful surprise or because of the extreme propulsion, it doesn't matter at this moment. To illustrate it: A time span of about three seconds is perceived as the present by a human being. The Taycan needs exactly 3,2 seconds for the sprint to 100 km/h. The electric machines are supplied with more power with the Launch Control option. In this case it is up to 500 kW, or 680 PS. The Taycan Turbo S can do even better. The power goes up to 761 hp, the sprint to the country road speed limit is 2.8 seconds. We immediately believe the engineers that thanks to four-wheel drive it only takes away only tenths of a second if the track is wet instead of dry. 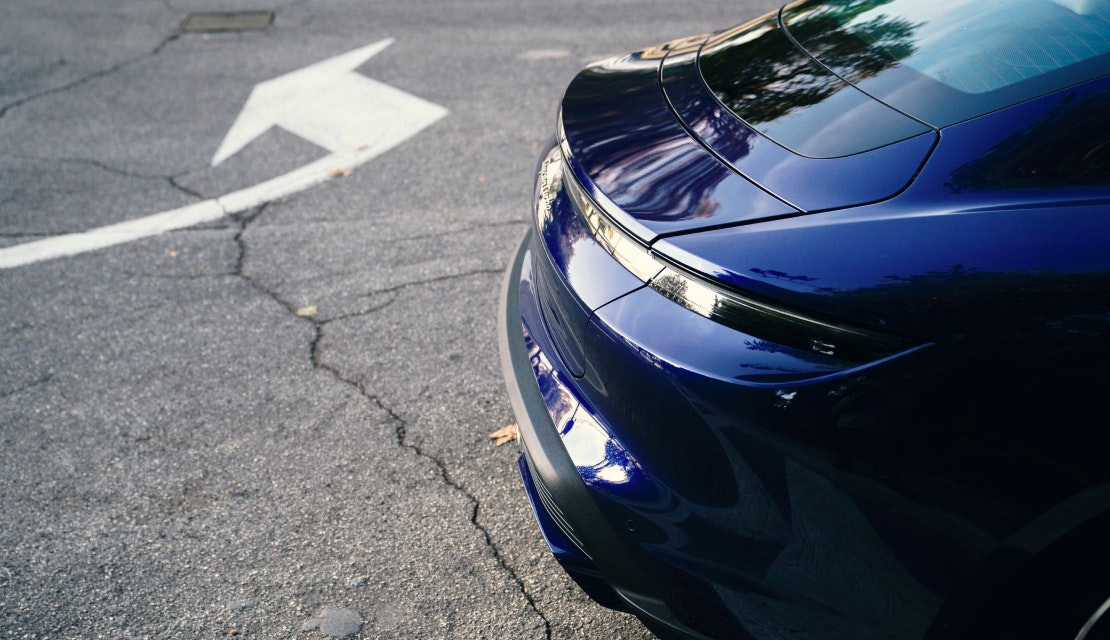 Inside, the driver is still deeply moved on the more leisurely way back. Is the charge good enough? Looks good, as the view of the displays shows. Even without using the »Charging Planner«. This involves planning the charging stations on all routes in order to achieve the shortest possible time. We select the Range mode. The car is now particularly efficient on the road. This also applies to the all-wheel distribution. In extreme cases, the Taycan is only driven via the front wheels. The cooling air flaps close and the chassis level is lowered by 20 millimeters. The rear spoiler is set to minimum drag. Air conditioning, hydraulic pumps, air suspension or the main headlamps strive to consume as little electricity as possible. Engineers who are deeply involved in the subject are turning the widely used term in electric mobility, »fear for range«, into »desire for range«. Probably Porsche’s interpretation of »beautiful new world«.

Today we cannot check whether the range after WLTP of 450 kilometers without recharging is realistic. The shore length of Lake Garda is only 154.8 kilometres. For two laps around the lake it should be enough. Depending on the driving style and of course the season, it can take longer or less. Maybe we will drive the complete distance from Germany to Lake Garda soon - that should give more information then. But today we simply don't have enough time for that. 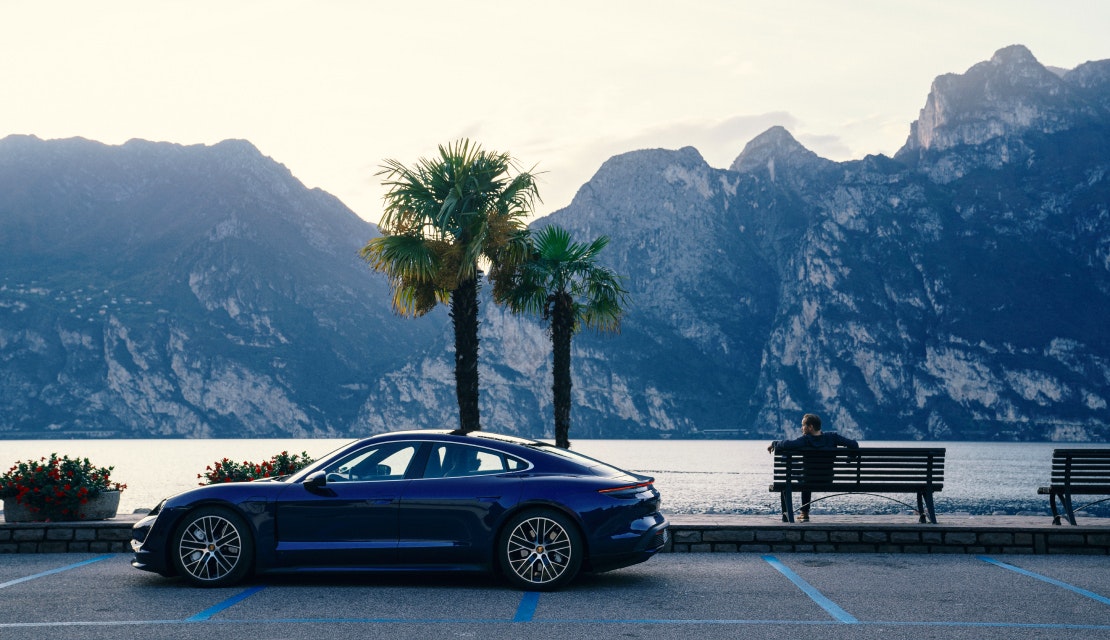