The first sketches of the eagerly awaited Porsche Taycan have finally been made public. We think it's excellent. And let Porsche's Style Manager, Michael Mauer, have his say.

Saltatory conduction - what was that again? Exactly, the particularly fast transmission of perceptions in the human body. Thanks to insulations on the cell membrane, an electrical stimulus races through our nerves at up to 100 meters per second. Especially useful, for example, when we drive sporty - or when we see an attractive design. Ergo: just right when it comes to the new Porsche Taycan. And since perceptions become emotions, we only feel positive emotions towards the taycan. One person who can relate is Michael Mauer, Head of Style Porsche. In an interview with the Porsche Newsroom, he talks about the challenges involved in the design and design process of the Taycan.

Mr Mauer, with the Taycan there will soon be a Porsche on the market that is like no other before it. This marks the dawn of a new era in many respects – also in terms of design?

"It was indeed one of the most exciting yet challenging tasks, simply because there was nothing to build on. Still, we didn’t start from scratch because we knew that this new model had to be recognisable as a Porsche at first glance – in other words it had to embody what I call brand identity. With the Taycan, we continue to consistently pursue the strategy of offering the sportiest vehicle in every segment in which we are represented. In terms of design, this is initially expressed in the proportions. Sports cars have a more dramatic width-to-height ratio than other vehicles. And I would go so far as to say that we have redefined the architecture of purely electric vehicles to a certain extent."

In what way? What’s so special?

"The Taycan is absolutely unique in terms of its proportions. Usually, purely electric vehicles are higher than their conventionally powered counterparts because the relatively heavy and large batteries are positioned in the floor of the vehicle while the occupants sit above them. We were not willing to accept this. However, you can’t just install the batteries in a different place – for reasons relating to driving dynamics alone – as the centre of gravity must be as low as possible. Because you also can’t just make the vehicle wider, the specific challenge was to position the passengers as low as possible without them having to assume a reclined position like in a Formula 1 racing car. We solved this with so-called “foot garages”. They enable a comfortable sitting position even in conjunction with the sporty vehicle height. In retrospect we can say that this so-called package was the greatest challenge. How high can the vehicle be? How long and how wide should it be, how horizontal or upright will the passengers sit? That’s what’s typically Porsche to me – this striving to find the ideal solution."

How early were you involved in development?

From the outset. That’s the most important prerequisite for a design strategy. In the past, the package would have frequently already been defined when we joined the project. Consequently, a fundamental design decision had already been made at this point. In this context, I always like to explain our process, which essentially consists of three steps: proportions, styling and details. The proportions are elementary. If they are not right, you can’t really do much retrospectively with styling and details. 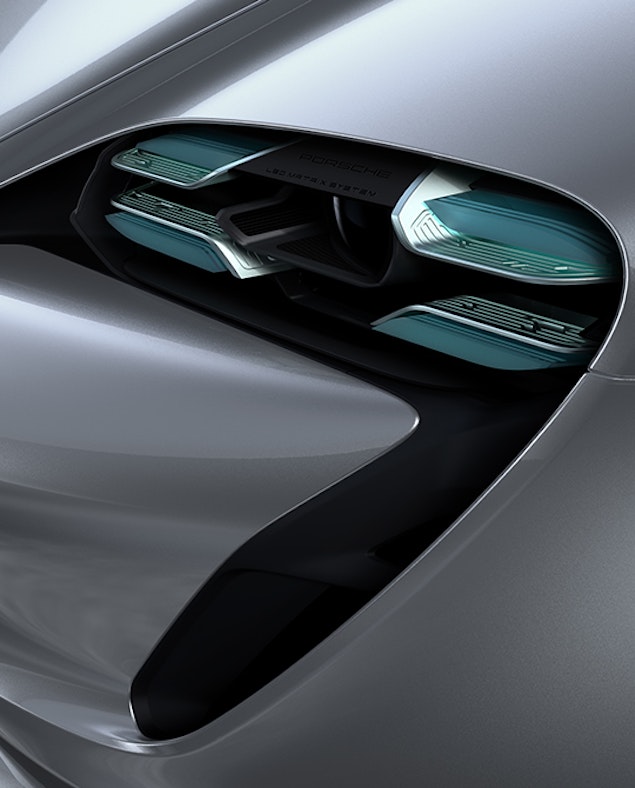 Was it clear from the beginning which direction development was going to take?

We had many discussions, particularly about the package. At times, we also considered launching into e-mobility with an SUV, but ultimately we made the decision to take this important step for Porsche with a sports car in order to make a clear statement. The question was how clearly do you indicate that this is the dawn of the new, purely electric era? Does this mean we have to change everything?

What is your opinion?

With a brand that is as strong as Porsche, it would not be a good idea to ignore all of the brand’s characteristic design elements. For me personally, there are always two components: firstly the brand identity – I recognise that it’s a Porsche. Then there is the second level, product identity – which Porsche is it? The brand identity is shown by different characteristics, starting with the proportions. It is demonstrated in the special topography of the bonnet and the front wings, the air intakes instead of a dominant radiator grille, our “flyline”, the falling roof line, and a strong shoulder at the rear. These are elements that characterise every Porsche. Differentiation then takes place at product identity level.

You explained that the Taycan is your first attempt at defining the appearance of models with alternative drives.

Yes, that’s correct. In terms of product identity we give each model series its individual characteristics – which Porsche is it? One of the crucial elements we have defined in this context is the shape of the headlights. We have invested plenty of development time in this element and developed a concept that we are now showing in detail for the very first time, around three months before the world premiere. It goes further than with previous models and is characteristic in terms of the product identity of our purely electric vehicles. The four-point daytime running lights, which are not as dominant today, are not only evident from the light pattern, but also from their shape. This sculptural design is important, as it’s the main element at the front. Modern lighting technology gives us fantastic options in this context.

It probably also helps the design that you aren’t forced to fit a large combustion engine under the bonnet?

This results in greater freedom for the Taycan, whereas it’s a completely different challenge for the Panamera or Cayenne. We can base the design more on the 911, and that helps significantly in terms of brand identity. However, we are going one step further within the context of product identity: aerodynamics and air flow quality are especially important for all-electric models because they greatly influence the range. For this reason, we did away with traditional headlights here and used a light source located in the air intake instead. The air enters laterally from the front and exits again behind the wheel housings. The air flow at the wheels is therefore calmer, bringing about significant aerodynamic benefits. 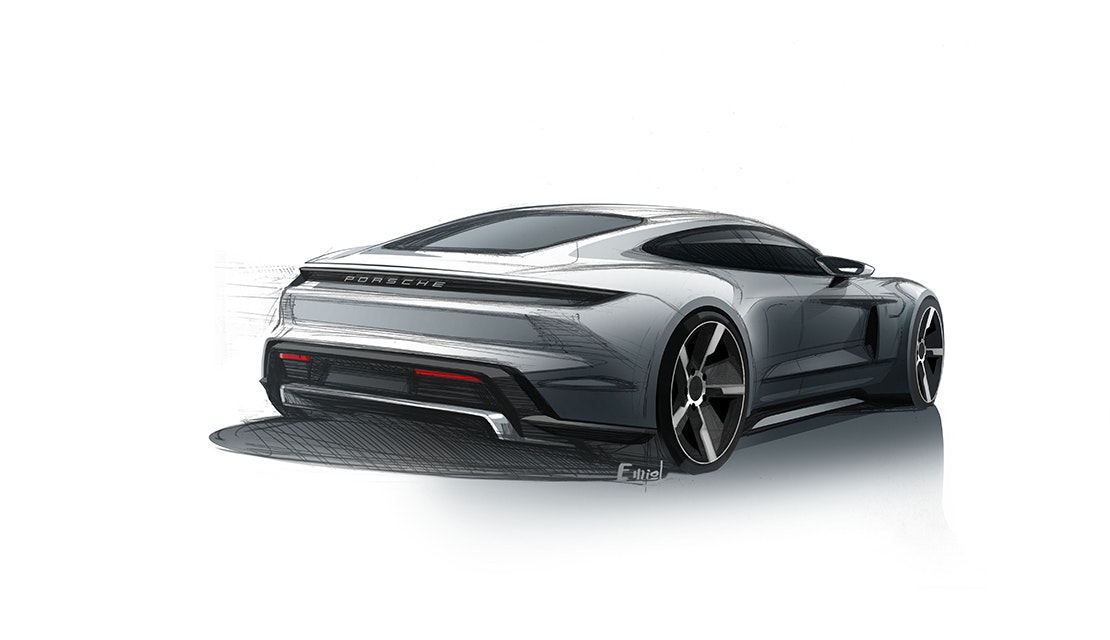 Were you able to adopt features from the Panamera? After all, it is also a sporty, four-door vehicle.

It goes without saying that we have benefited from the experience gained with the different Panamera generations. In the side view, I think that the downward slope of the roof line, our flyline, and the appearance of the side windows are particularly successful design elements, for example. However, as there is always the objective of giving the model an individual product identity, it was clear that the Taycan must not look like a small Panamera. And it doesn’t. The differences are so great that there is no risk of confusing the two.

This brings you back to the challenge of reconciling the goals of both recognisability and differentiation. It needs to be familiar, yet seem new at the same time.

You have exactly this effect when you look at the rear of the Taycan. On the one hand, you recognise the brand’s identity featuring a strong shoulder, what we call the recessed “greenhouse”, with beautiful proportions and surfaces that are as clean as possible. Obviously the Taycan doesn’t have tailpipes, so we emphasised the aerodynamics and focussed intensively on the rear diffuser which in turn represents the product identity of purely electric vehicles. The light bar running across the rear reflects our fundamental philosophy, where we introduce new elements through the product identity, which then have the chance to climb up a level and become part of the brand identity. Originally only the all-wheel drive 911 models featured a light bar, and now all Porsche models have it. The task now is to differentiate the feature again for individual model series.

Did you also discuss redesigning the crest with the introduction of the Taycan?

It is well known that we have repeatedly adapted the crest over the years. I am of the opinion that the brand’s trademarks should also evolve – just like we recently updated the model logo of the new 911 generation upon its launch. I would say the lettering has become slightly more jagged, and we will be adopting this for the Taycan. We have indeed already experimented with black-and-white crests as a high-quality engraving in aluminium on the bonnets of showcars. This creates a more contemporary impression, but breaks with tradition. Ultimately we opted to keep the current crest.

Speaking of tradition, how is design work changing as a result of digitalisation? Do you still need traditional tools?

Let me put it this way: creativity is still paramount and we draw that from designers’ minds, not digital pens or intelligent milling machines. However, we have become much faster because we can simultaneously work in the physical and digital worlds. Today, we can create data models from simple sketches and immediately reproduce them as 3D graphics on computers or large video screens. This is very attractive and accelerates processes, but I remain a firm believer that it is no substitute for crafting a physical model. There are things you just can’t see on a computer that will only stand out in reality. Sometimes you need to design a surface on the basis of mathematically “incorrect” parameters to make sure it has the right effect later. In some instances you will even be unable to state a reason why – you just have a feeling. For this reason, we still rely on tried and tested clay models up to a scale of 1:1 where each surface and each line is created by hand. 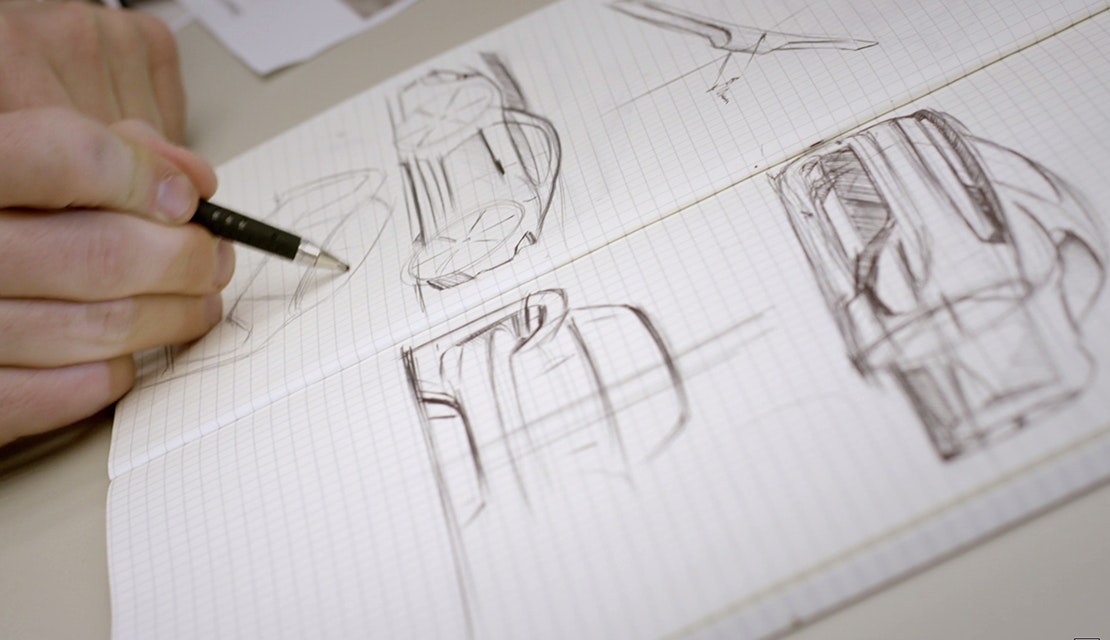 It’s reassuring to know that you can’t express everything in formulas.

It goes without saying that it’s also a cost factor, but I believe that you can tell if extra care was taken to design a vehicle. In my eyes, one of the greatest challenges is reminding myself that I am not designing the vehicle for myself, but for customers. They quite rightly expect an exclusive product that also demonstrates quality craftsmanship. The surfaces are charged with an engaging tension, with convex, concave, and everything flowing together. These are also signs of quality. Our customers greatly value this – and I’m sure they will continue to do so in the future.

And this future will now also be all-electric at Porsche, at least to some extent. Surely these are also exciting times for you personally?

Definitely! I started at Porsche when the development of the Panamera initiated a massive extension of the product range. We are now once again at a crucial stage for the company. It’s something very special to carry responsibility in these times. My vision is that the Taycan will become the icon of this new era, almost like a synonym for a purely electric sports car. Just like what the 911 has achieved in its segment over the past decades. 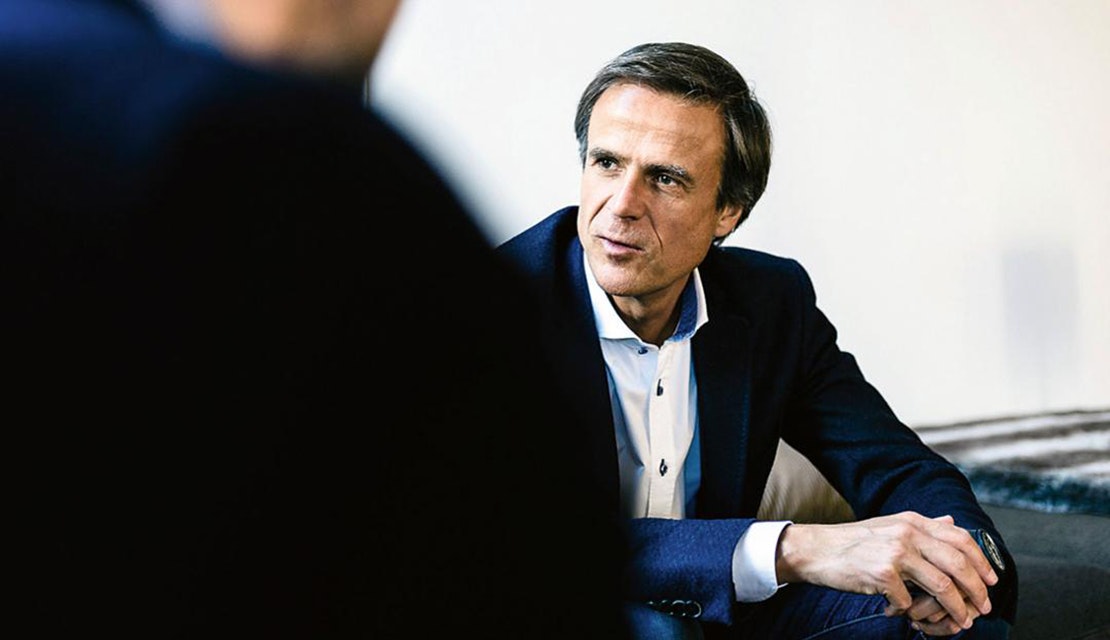