Please take a seat! Porsche No. 1 Roadster and Vitra DAW

What does a Porsche have to do with a chair? Nothing. However, this only applies at first glance. Let's take the zeitgeist as a brace. And that's where the sports car has found its place since 1948. The same applies to the Vitra DAW.

»Whether it's a car jack or a space station, this thing has to work, and it has to work in the best possible way.« The designer Victor Papanek wrote this sentence in 1968. We do not know whether in this context he also thought of a Porsche or of Vitra seats that were as beautiful as they were practical. But we know that another statement of the design philosopher certainly does not refer to products like these: »There are professions that do more harm than a designer. But not many.«

How nice that Ferry Porsche attached as much importance to the exterior as to the interior as Ray and Charles Eames did. It is certainly a coincidence that the Porsche 356 No. 1 Roadster and the Vitra DAW both date from 1948. But isn't it exciting that these striking works have set standards in terms of design? 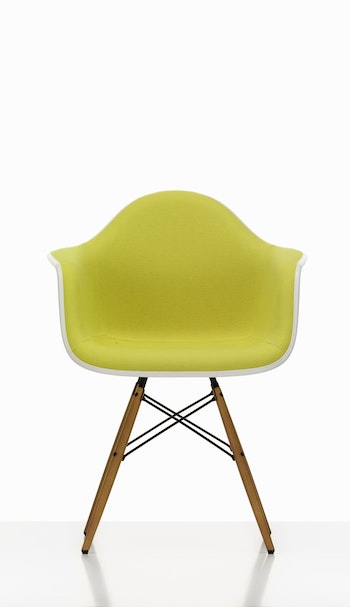 Technology also sets milestones. With the development of polyester resin, it became possible to create a seat shell that fits the body. The DAW is not only the first series-produced plastic chair, but has long since become a classic. The work of the Ray and Charles Eames couple is often referred to as the »chair of the century«. Does anyone object when a Porsche is described as the sports car of the century?