Life is cool by the pool

Electricity? Flowing, much like water. Plus the lines of the Taycan 4S, about which one could confidently say the same thing. All that combined with being in the search of the summer: Equates ending up in an open-air swimming pool. What is somehow logical. Just like the fact that you let yourself and your thoughts drift at the somewhat different pool party.

Porsche, electric, four-wheel drive. How does that fit together? Let's take a quick dip into history. In a nutshell, it goes like this: First was the Lohner-Porsche with electric wheel hub motors, then nothing for a long time, then came the study Porsche Mission E and this was followed by the Taycan as we know it today. After Turbo and Turbo S, the Taycan 4S was presented a few months ago. Admittedly, the four-wheel drive that gives the car its name isn’t too necessary in summer - especially at the pool. But it doesn't really matter. It's a bit like swimming: What you can do, you can do. And you play out your qualities when you need to. 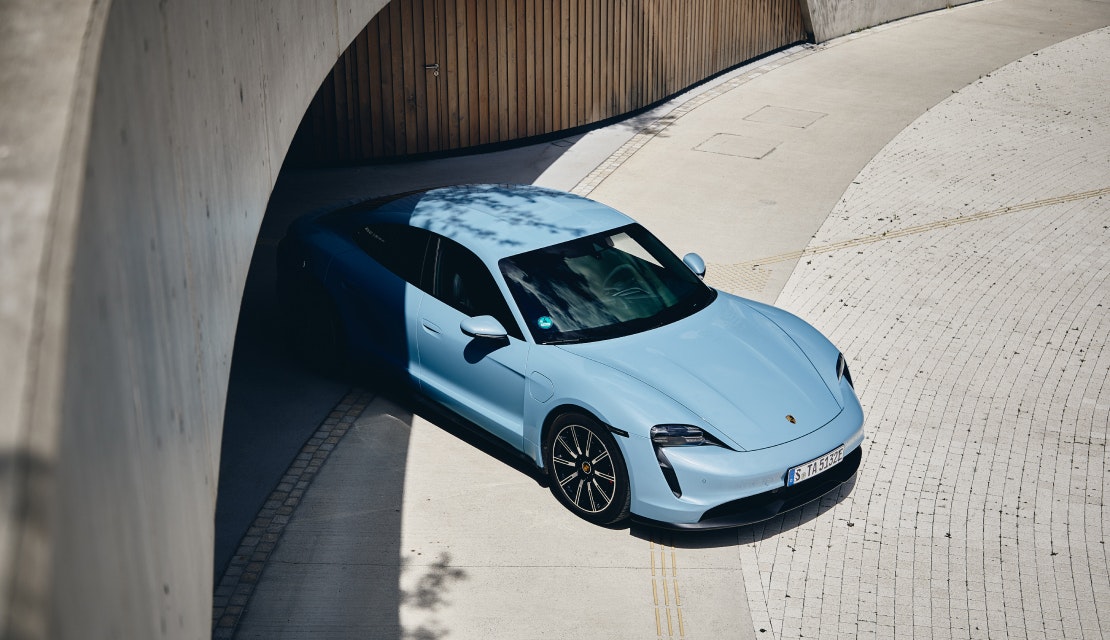 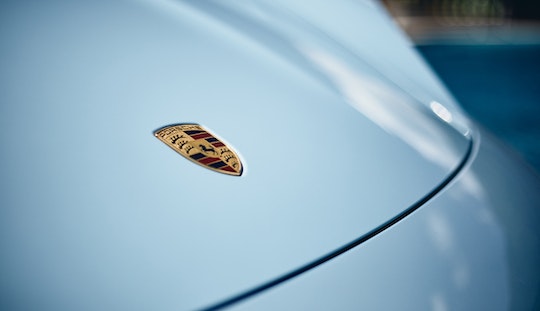 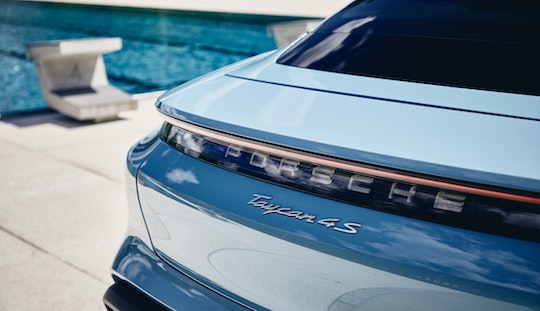 It's not too different at the starting block: Depending on the battery equipment (performance battery or performance battery plus), 530 or 571 hp are available there. That is peak power that can be called up for a short time (for 20 seconds). And only these are actually worth mentioning. You need them when you overtake. Or if you want to do a workout in the June sun. Just hold your breath for four seconds - until the 100 km/h appears on the speedometer. But it is just as possible to swim along with the traffic, which at exactly this speed of 100 does not even require thirty horsepower. In either case: Life is cool by the pool. And by the Taycan. 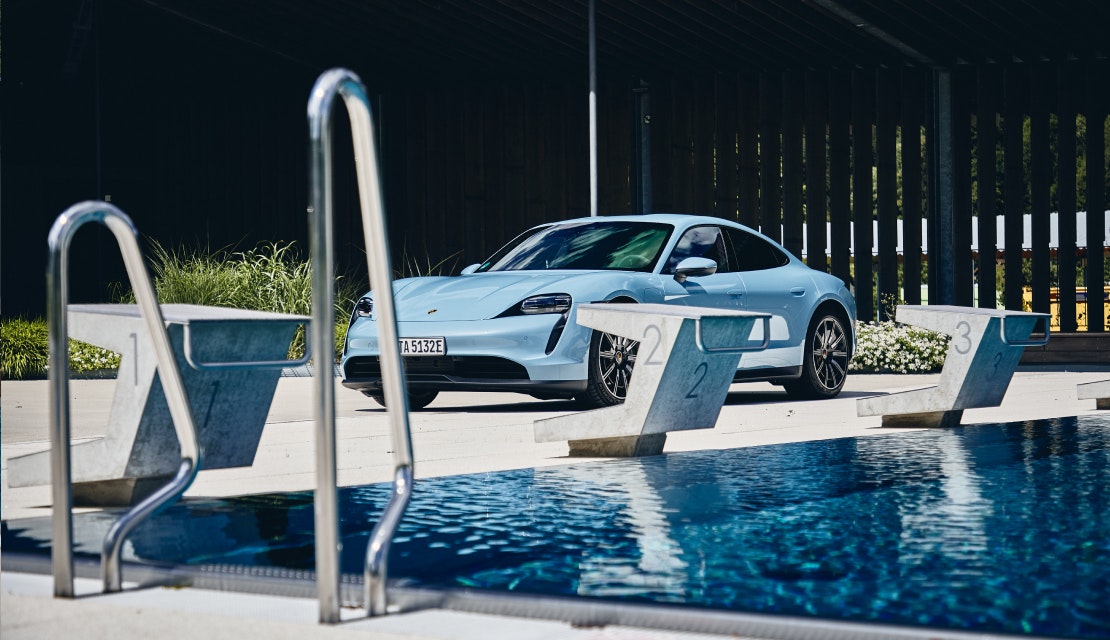 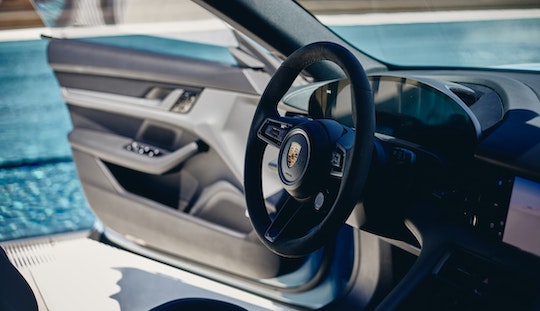 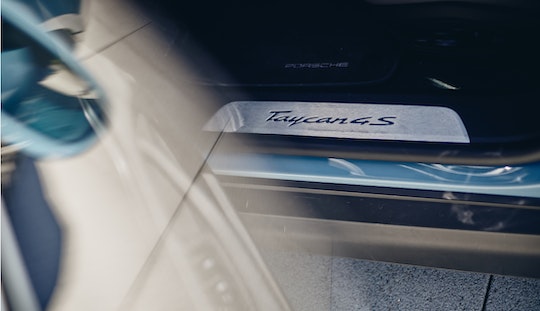 The even weight distribution, the sophisticated chassis and the battery, which is embedded as deeply as possible in the ground structure are to thank. Then there is the software as a centrally networked control system: It analyzes driving situations via 4D Chassis Control. The input of longitudinal, lateral and vertical acceleration and the Porsche Active Suspension Management (PASM) electronic shock absorber control system thus creates a capital straight-line, longitudinally solid and unwavering vehicle. Also unsinkable? We voluntarily forego the practical test there. 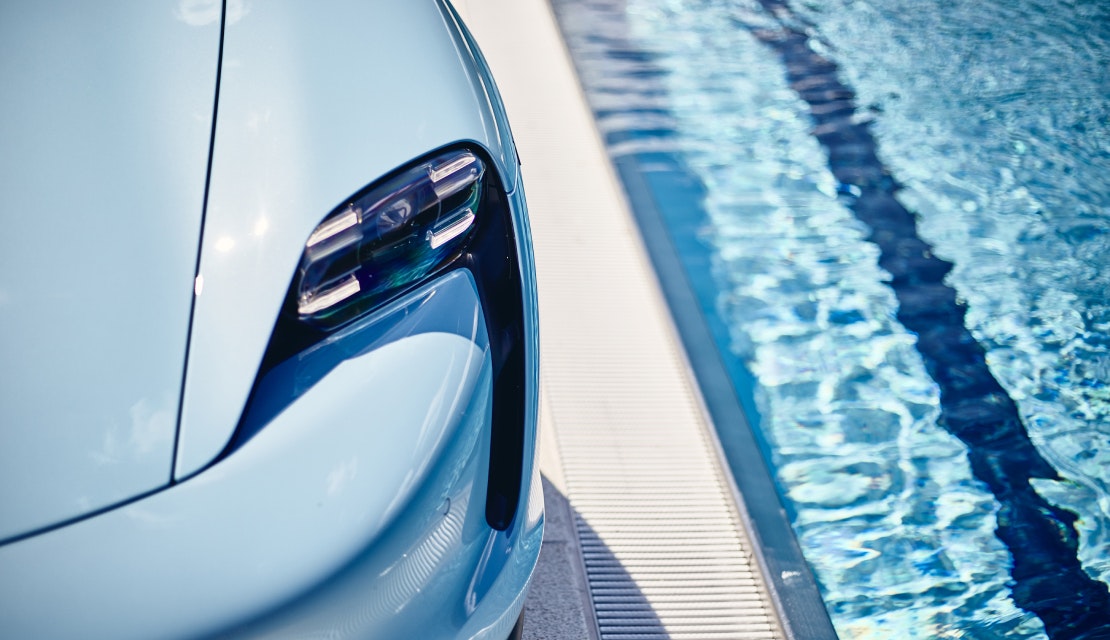 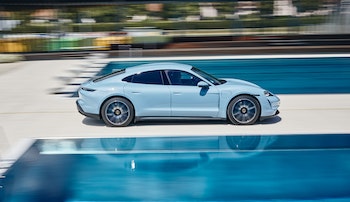 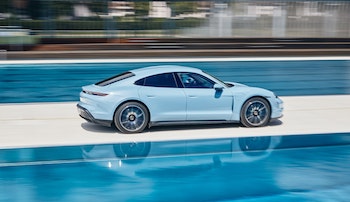 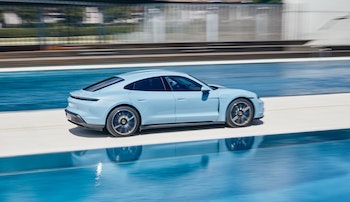 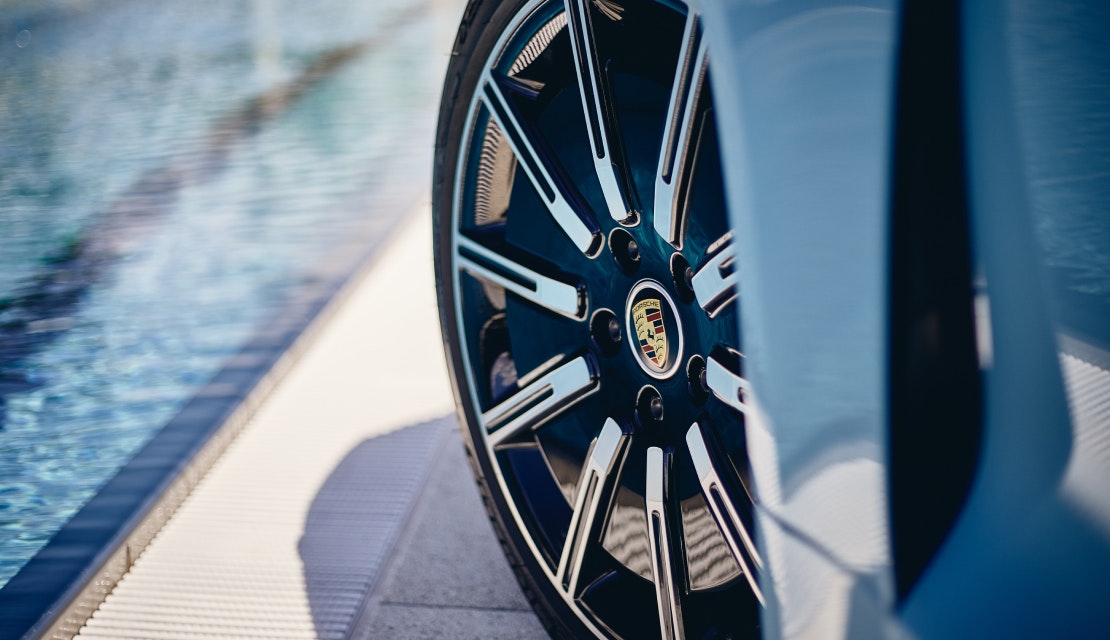 We prefer to devote ourselves to the lightness of being: Not only do vehicle and leisure activities share a color, but also this summery feeling. Everything is just that little bit lighter. While at the pool edge you owe that to the sun and in the water to your own buoyancy, in the 4S the chassis is responsible. That the synchronous networking of the entire system, including the recuperation processes, feels like it is meant for space travel? Sounds a bit complicated somehow, but it still fits quite well. Before astronauts let themselves be pressed into their seats during rocket launch, they spend the whole day in the pool during training. 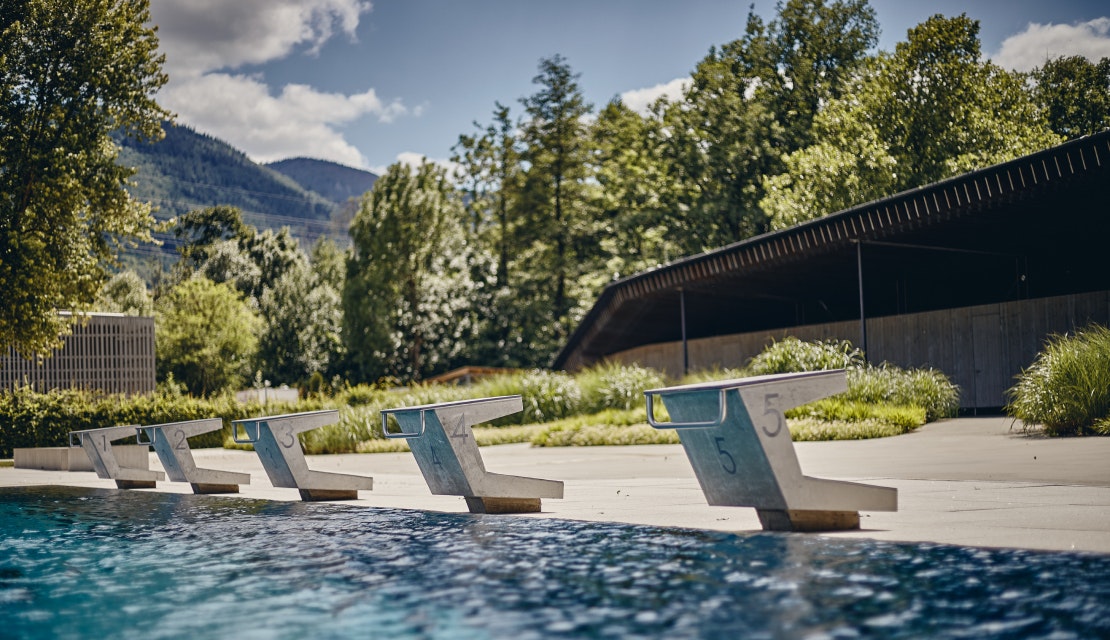 »Come on, let's put the Taycan in an outdoor pool«, we thought. So we looked for an architecturally attractive example for swimming outside and soon came across »s'Bad« in Waldkirch near Freiburg im Breisgau. All the more gratifying that the local community also found our idea pretty great and actively supported us. So we could put the car in a wonderful summery scene: »As unfussy, minimalist and time-resistant as possible« the »s' Bad« should be, explained Detlev Kulse, head of the Planning, Building and Environment Department in Waldkirch and helped bringing the award-winning, barrier-free design-pool to life. Well, the properties look familiar. More information about the outdoor pool can be found here: