Working in a foreign country: For some that’s enough of an adverture. But not for Shane Oosthuizen. That’s why the creative head decided to make his way home from Austria to South Africa the adventure itself. How? By driving a Porsche Cayenne over two continents to the southernmost tip of Africa. In our Interview, he tells us about his plans, the modifications on the SUV and much more.

Hello Shane! Please tell us: What does freedom mean to you?

Freedom, for me at least, is being able to live without borders. Yes, sure, we are forced to follow rules as part of a functioning society, but being able to “escape” from all of that for a little while is what freedom is all about. It doesn’t mean you have to break the law, but surely, it means breaking the rules and going against the grain – like overlanding a Porsche Cayenne through Africa, for example.

Adventure to me is all about visiting places you've never been before, and also the suspense of not knowing what to expect. For this trip, we’ve chosen a very unusual travel companion: a Porsche Cayenne, so it’s both an exciting and daunting prospect. But that’s exactly what adventure should be – if you know what lies around every corner, you’re not learning anything new. 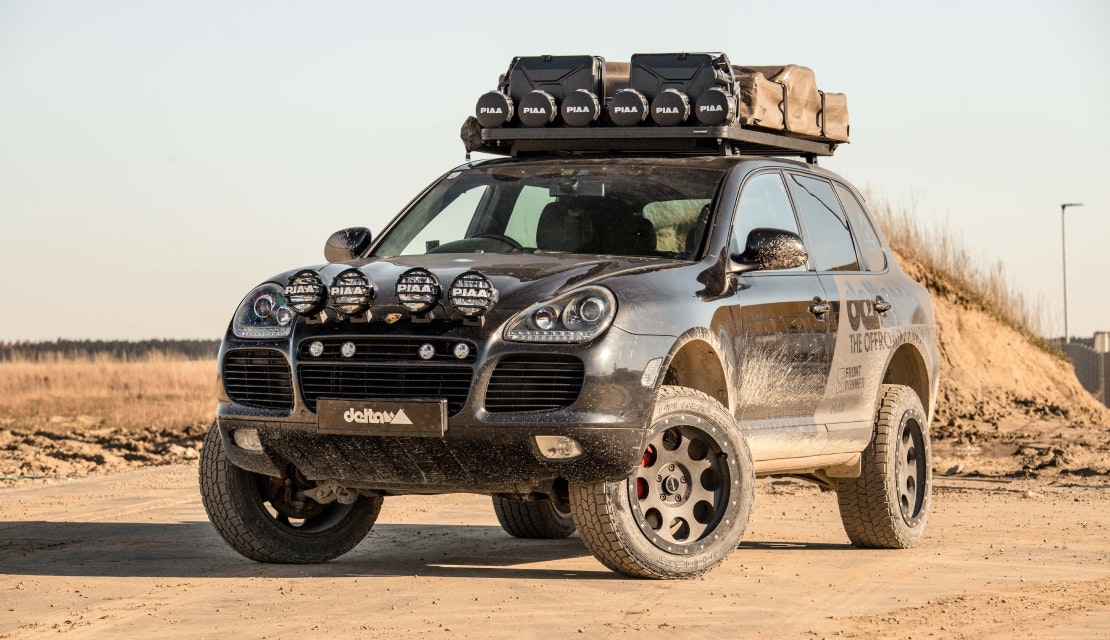 That trip across Africa sounds like a pretty big adventure itself. How did you get the idea to travel from Austria to South Africa?

I’m South African. I’ve travelled around Southern Africa quite extensively, but the greater African continent has always been a bucket list challenge for me. When I first started thinking about this trip, it was merely a pipe dream. But having the opportunity to work here in Austria, it all started falling into place. At the end of my working contract, I knew I would have to go back home at some stage – so why not make an adventure of it?

There are some areas on the route that are not necessarily considered safe from a Central European perspective. Do you have any concerns? Or are you more the guy that remains unflappable?

Safety is always a concern when it comes to Africa. From animals to bad roads and criminal elements – it‘s something you just cannot ignore. I’ll also be travelling with my fiancé, so I have to be very mindful of our surroundings at all times. We‘re also very aware that our vehicle choice is going to attract a lot of attention, so the route will be away from overpopulated areas. That on the other hand brings its own set of concerns. It’s all about planning, being prepared and vigilant. Luckily, I have some experience to deal with most safety fears. But that‘s all part of the adventure at the end of the day. 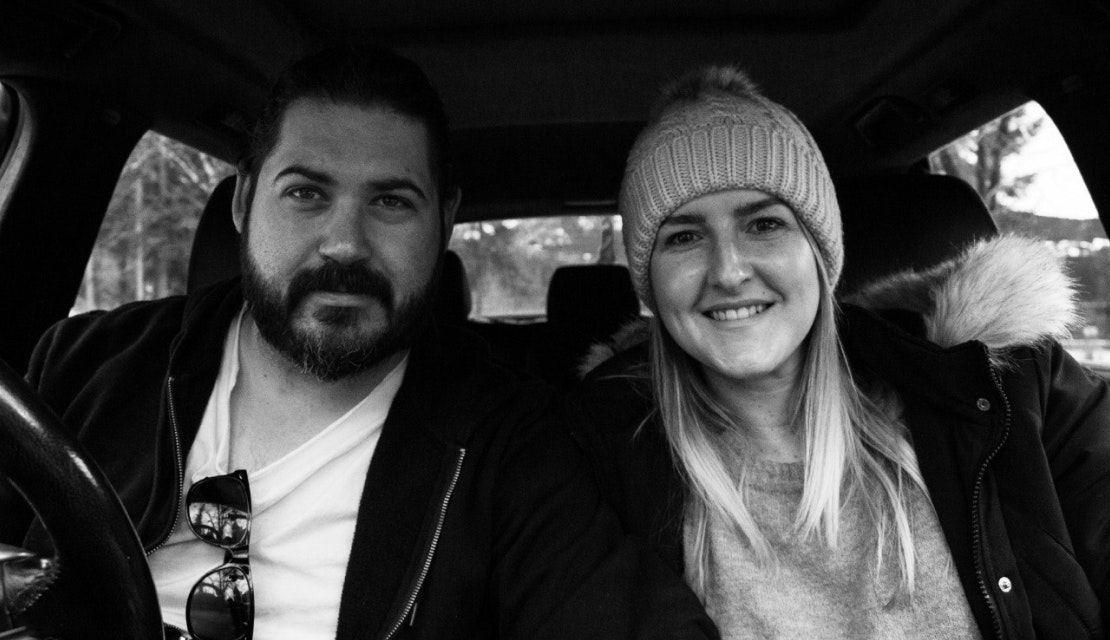 Google Maps claims that the tour would be possible in seven and a half days. What pace have you set yourself for the tour?

If we really wanted to make the fastest time, we could drive on tarred roads all the way from Cairo to Cape Town. But in fact we’re planning on exploring a few places which are far away from any highways. So we actually haven’t set a limit for ourselves. If I had to guess, I’d probably say we’re going to be on the road for about 3 to 4 months.

And when do you plan to start your personal cross-country rally then?

This is a tricky question. A big part of our plan was to be at the World Rally Championships in Kenya by mid-July. So, originally, we were hoping to hit the road at the end of March 2020. But, with the coronavirus currently putting a number of airports and borders on lockdown, we have had to rethink our plan. It is now likely that we will leave at the end of June – depending of course on how the virus affects our travel plans. 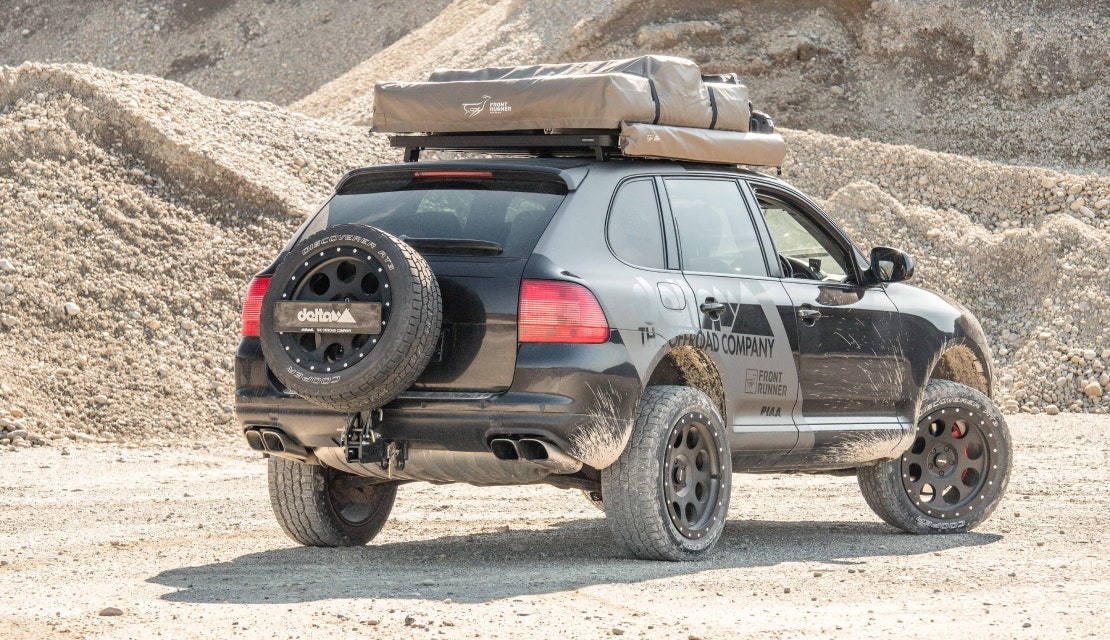 How long did it take you to make the modifications to the vehicle? And what have you modified?

It’s taken about a year to get to this point. We started by working out how to increase the packing space, so the first step was to fit a Front Runner roof rack. This takes care of our tent, awning and jerry cans for an added 40 liters of fuel. We also have a lockable drawer system in the boot and a full-sized spare wheel, which is kept in place thanks to a Mirack hitch-mounted wheel carrier.

The early 955 models, like ours, were over-engineered for off road driving. So as standard, we have diff locks, low range and high clearance thanks to the air suspension. Even fuel consumption is on par with bigger, heavier SUV which are more commonly used. And with a 100-litre tank, we should be able to average over 600 km between fill-ups. We faced a lot of naysayers in the build-up to this trip who said we‘ll never make it — I’m looking very forward to proving them wrong. 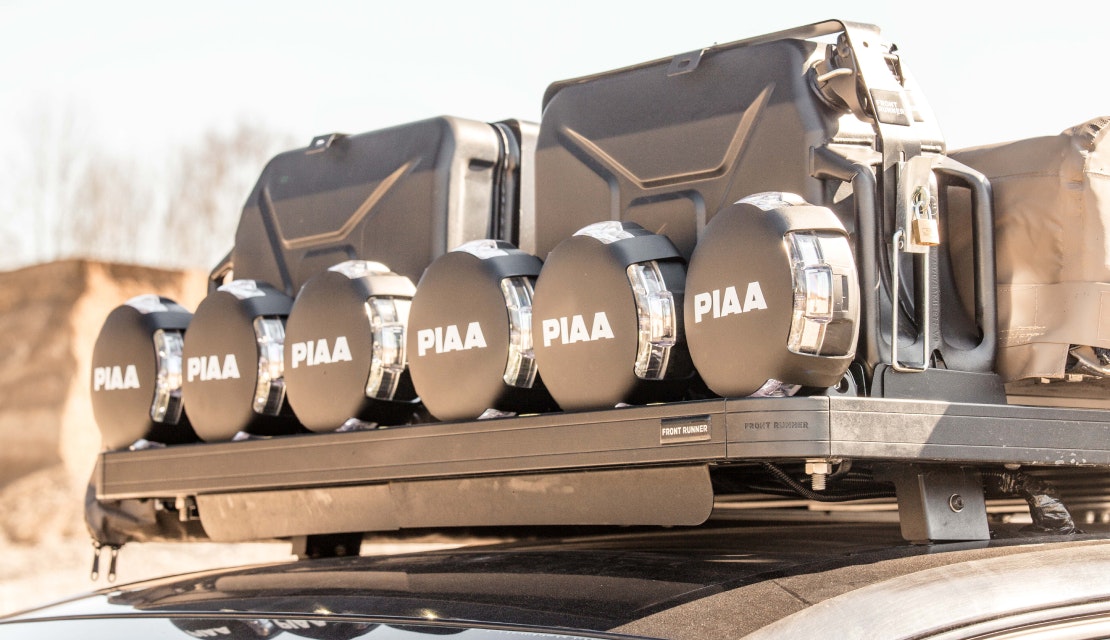 How long did it take you to make the modifications to the vehicle? And what have you modified?

It’s taken about a year to get to this point. We started by working out how to increase the packing space, so the first step was to fit a Front Runner roof rack. This takes care of our tent, awning and jerry cans for an added 40 liters of fuel. We also have a lockable drawer system in the boot and a full-sized spare wheel, which is kept in place thanks to a Mirack hitch-mounted wheel carrier.

The most notable modification though is the addition of all the rally lights. These come courtesy of PIAA and give us just enough illumination if we absolutely have to drive at night. They weren’t 100% necessary, but hey - they also look cool! 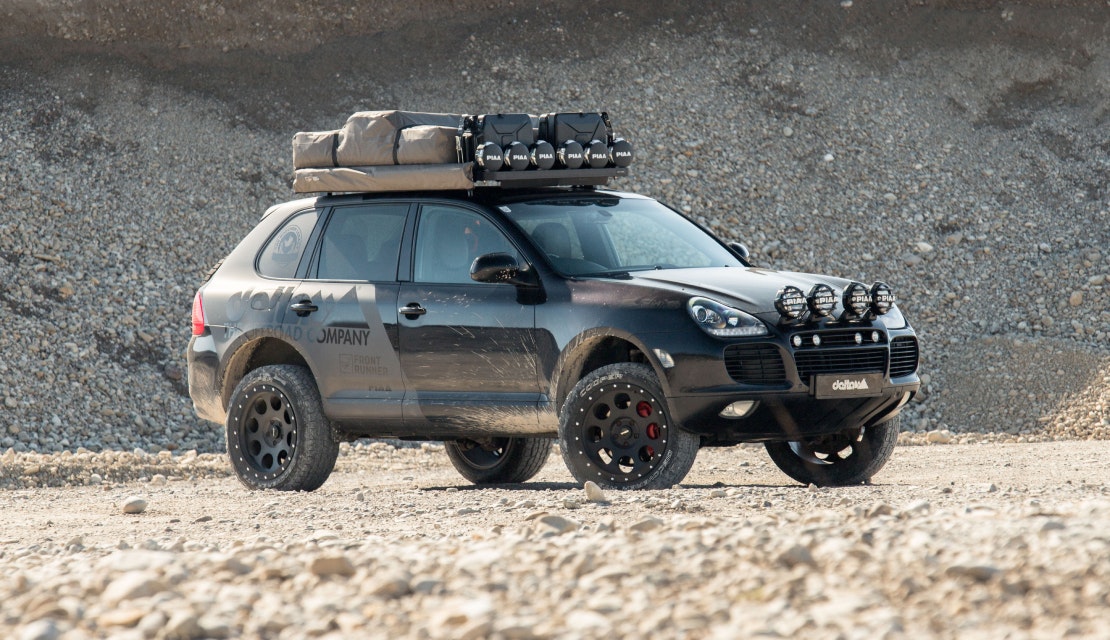 On the suspension side of things, we kept the standard air system from Porsche. Nevertheless, we used some links to get a little extra lift at its normal setting. Due to the Cayenne’s massive front brake rotors, we were limited with the aftermarket wheels we could go for. Luckily, Delta4x4 were able to find a 20” wheel and tire combo for us, so we’ve gone with the Delta »Klassik B« rims and Cooper tires. There is a host of other modifications we’ve made, but these are the most important bits.

I also have to say that it would not have been possible without the input and help from the guys at @Delta4x4 in Germany and @FrontRunnerEuro for the advice and fitment.

What’s your daily driver when you are not riding straight across Africa, but move around in Austria?

Actually, the Cayenne is also our daily driver! I believe that cars are made to be driven — they don’t want to be stagnant. It also gives me an opportunity to locate any potential problems before they happen and make sure the car is in top condition before we take on this adventure. So far, so good! 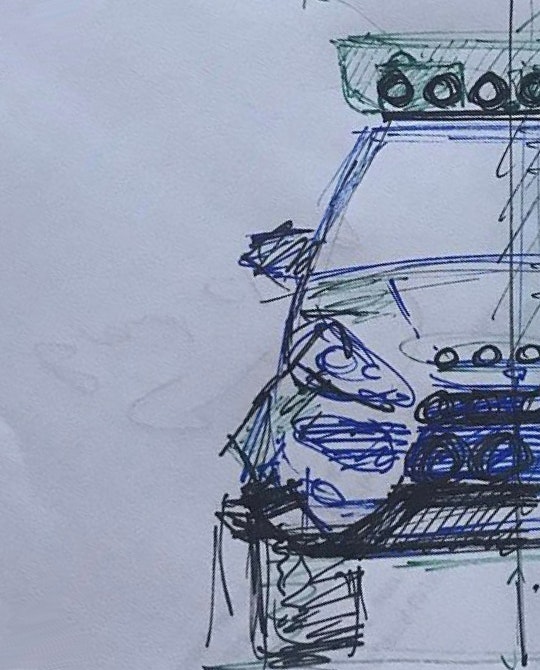 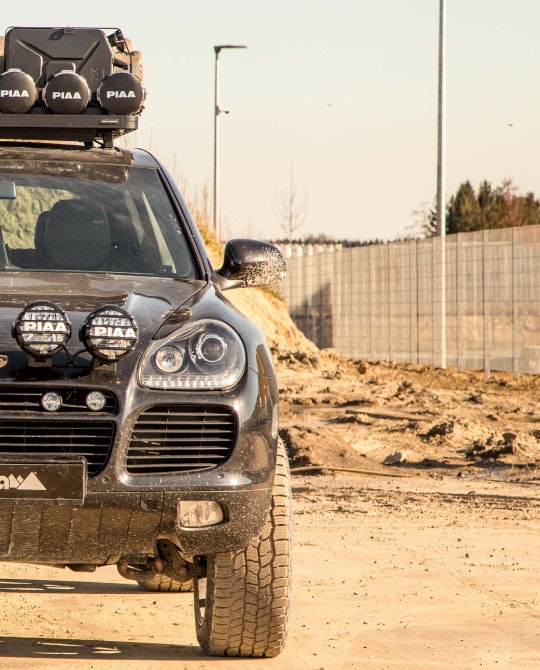 And what does your everyday life look like otherwise?

When I’m not obsessing over the build or planning the trip, I work as a creative strategist at a large industrial and automotive design company. I’m also a freelance writer and rookie photographer in my free time.

Apart from your planned trip and the modified Cayenne you’ve created: Why are you »Crazy about Porsche«?

As far back as I can remember, I’ve been a Porsche fan. I think it has to do with its honest, underdog appeal. For me, the 911 - particularly the older air-cooled model — are the coolest cars to ever hit the road. And when you consider just how many there are which are still driving, it’s really easy to be crazy about them. 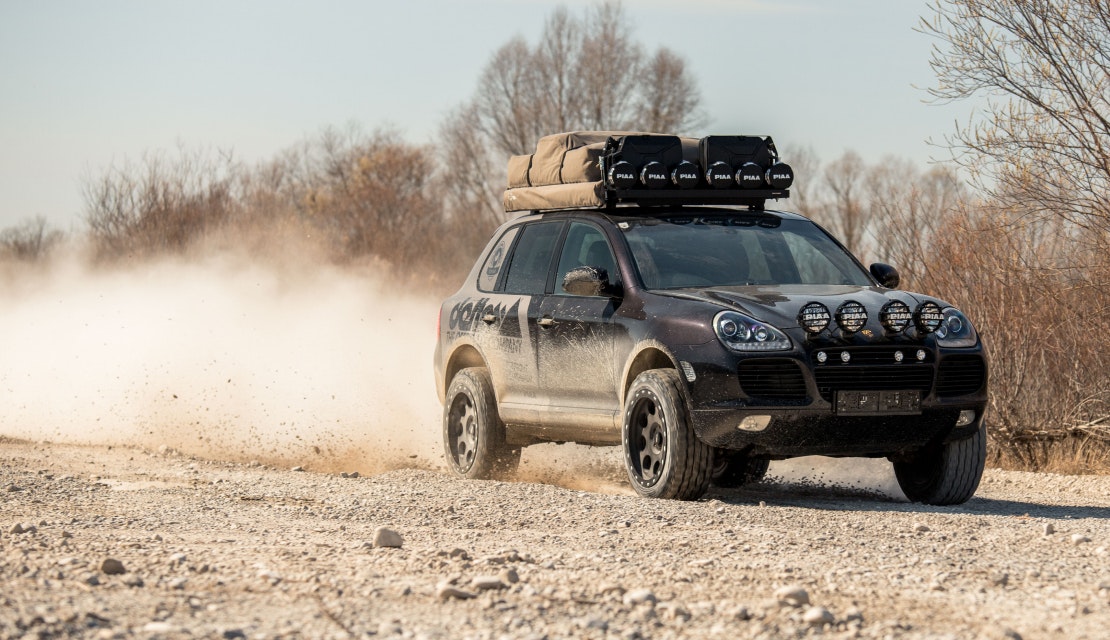