Boards that mean the world

Skateboard deck, refined with an illustrated Porsche as motif.

As a child of the eighties, Sebastian Toddenroth grew up on a skateboard. But as sacred as his board was to him, he would have preferred to trade it for his neighbor's Targa. After all: Sebastian was allowed to sit behind the wheel from time to time with the engine switched off and dream about his own Porsche. A few years ago, the automobile designer fulfilled this dream with the purchase of a Targa. And when Sebastian isn't on the road with his 1979 911 in his spare time, he makes illustrations of his Porsche. This gave him the idea to combine everything: the skateboard, the Targa, the illustrations. The result is a unique skateboard deck, refined with an illustrated Porsche as motif. Sebastian's Porsche.

If you are interested in your own individual Porsche skateboard and would like to find out more about the project, the proceeds of which will be donated in full to the Children Stroke Aid (Kinder-Schlaganfall-Hilfe), just take a look at Asphalt Kultur: asphaltkultur.bigcartel.com 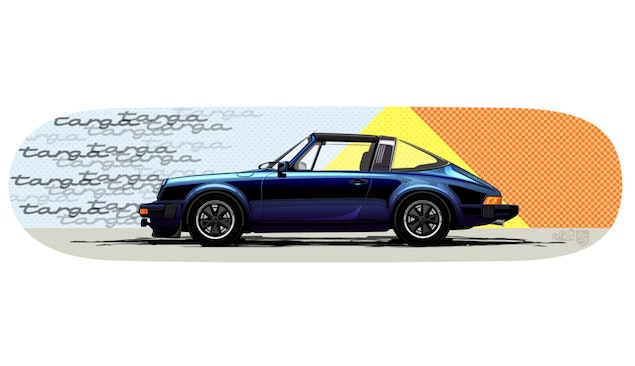