24 hours until the tears flow

This weekend the first big endurance race of the year 2020 will start in Florida. At the Daytona 24 Hour Race in 1968, Porsche celebrates one of its early overall victories in the brand world championship. The victorious 907 Longtail is driven by the aces of the time, Vic Elford, Jo Siffert, Jochen Neerpasch, Rolf Stommelen and Hans Herrmann. In 1995 a Kremer-Porsche K8 Spyder wins. Jürgen Lässig is part of the cockpit crew. A good reason to call him a quarter of a century later.

"Mr. Lässig, exactly 25 years ago you won the legendary 24-hour race at Daytona..." Quick response from the racer: "That's the first I've heard of this!" We continue: "We've done a lot of research. May we invite you for an interview at the crazyaboutporsche editorial office?"

Jürgen Lässig from Reutlingen does not care much about the statistics of his racing career. That's why he hasn't given much thought to his 25th anniversary or the number of his starts at Le Mans. "Did I really drive there 16 times?" That's right. In these 16 starts between 1981 and 1997 he is seven times among the top ten. In 1987 he even finished second overall in the Porsche 962 C together with Pierre Yver and Bernard de Dryver behind the factory 962C in the legendary Rothmans livery of Stück/Bell/Holbert.

Jürgen Lässig accepts the invitation. And apart from the statistics, he has a lot to tell us. Why does anyone want to become a racing driver when there are many other exciting careers? "It's not the money," he clarifies, "for me, racing has always cost money." The core of the whole thing is rather the desire for speed. This requires the courage to take risks and the ability to control vehicles at high speed. "You can learn to drive fast, but you either can or cannot drive at the limit," he says. And makes a few of us at crazyaboutporsche think.

Anyone who is born with talent in excess and who realizes this at an early age strives for a steep career in racing at a young age with a great deal of professionalism and even more support from parents or other sponsors. Lässig stops the train of thought without abruptly: "It was very different for me." 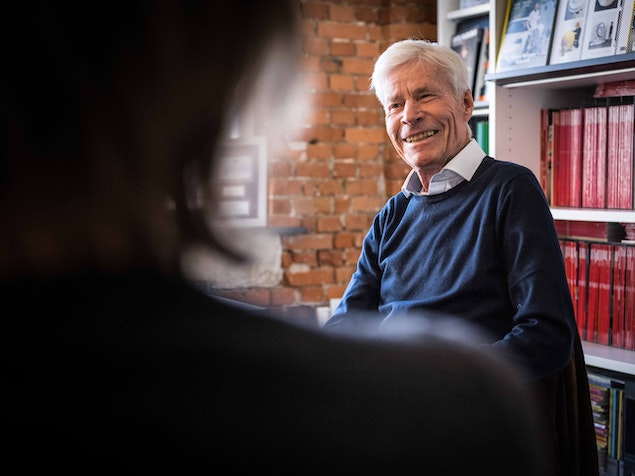 However: the joy of sheer speed was there early on. "I've done some crazy things on my bike." Especially with the first motorcycle, a used Puch 250 SGS with 16,5 PS. "I'll never forget that feeling of being really fast on the road for the first time." Break. After decades Jürgen Lässig looks the speed, finds it somewhere in his memory, starts to smile. By day and night he rides his motorcycle whenever possible. He tells us of his route from Reutlingen via the Swabian Alb to Sigmaringen. He laughs when he remembers two construction workers who were busy painting road markings in a long right-hand bend before Trochtelfingen. "When I passed trough, buckets of paint flew through the air, and the guys jumped into the ditch."

For his way home he choose another route. Just in case. The Puch is followed by an NSU Max, the first BMW, accompanied by the advice of some friends, at his speed he absolutely has to do a race. It comes differently. Business studies in Hamburg, in the evening the job as pianist in a jazz band. On many weekends he goes home to Reutlingen. With the BMW 51/3 it takes 6.5 hours for 700 kilometers. One refueling included. A little later the young man becomes self-employed and earns good money.

At some point, an Alpina BMW follows on the automotive ascent between Fiat 600 and even before the first Porsche. As a Swabian, Lässig doesn't let himself be told twice that there is a ten percent sports driver's discount when buying the BMW, at least when the car becomes a piece of sports equipment. That must have been around 1974. Lässig registers for a race at Hockenheim. He not only gets that discount he wanted. His driving is watched. And there follows the offer to drive a Porsche from the Max-Moritz racing team, which was then highly respected throughout Germany. 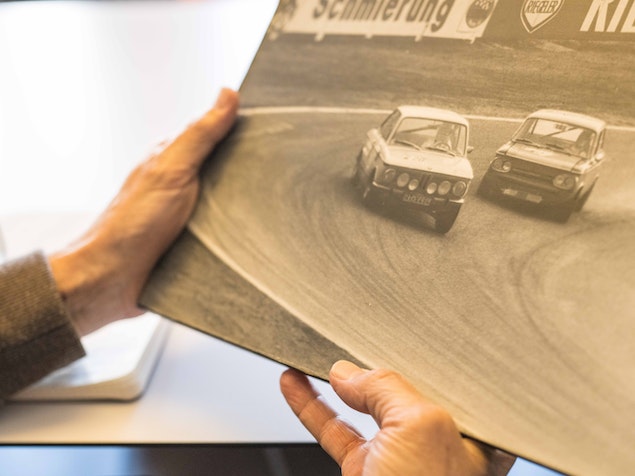 Good results in the racing championship follow. At home he makes a name for himself as the local hero at the hill climb in Neuffen. Comment on many a victory: "There was a fabulous plum cake at the finish, it's worth going uphill fast."

We find a shortcut in the career ladder. Become fundamental again. "A victory triggers an indescribable feeling that lasts for a long time," says Lässig, speaking from the inner life of an athlete. "Failure is bad, it always took me days to process such a catastrophe." The sportsman talks about whether defeats on the slopes might not lead to mental strength that helps to master dark hours in both professional and private life. "Everybody has that." In life the racing line is perhaps even harder to hit than on the track.

A good keyword, this racing line. It offers the fastest way to the goal. Lässig explains this clearly: "This applies to everything, from cycling to racing." This optimal connection between the beginning and the end of a curve should be hit by the racer if possible. Lässig divides the 23 kilometres of the Nürburgring-Nordschleife into sections, which he teaches himself in the Eifel within 14 days. He speaks sequences of curves into a dictating machine, he remembers color markings that Nordschleife specialists have painted on the track for better orientation. The result is many overall victories in the long-distance cup. 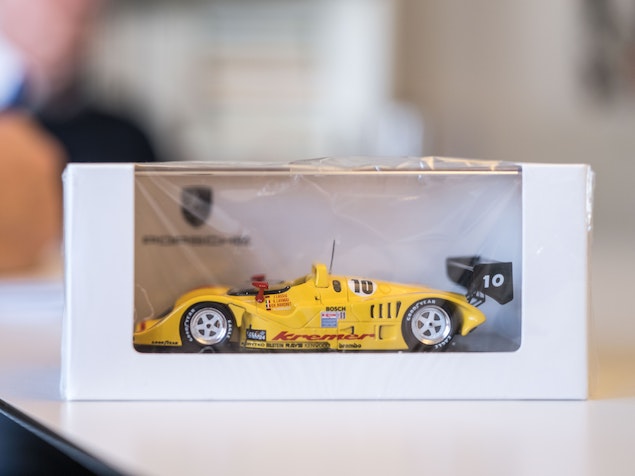 The Porsches are getting stronger and stronger: Carrera RSR, 934, 935, first by Max Moritz, from 1980 for the Kremer brothers from Cologne. In addition, there are starts in the legendary Procar series, where Formula 1 stars with identical BMW M1s compete against the best non-Formula 1 stars in Grand Prix races. "The teams I drove for are professional, that doesn't necessarily apply to me," explains the noble amateur. He was always fit, even today he plays soccer Saturday for Saturday and tennis Sunday for Sunday in the team of the Reutlingen club.

The fastest racing car a private driver can dream of in the early eighties is the Porsche 956 and its successor 962 C. 650 hp, weighing only 820 kilograms and costing almost a million marks. Even though these Porsche's can be sold well as used cars at the end of a season between 1983 and 1992, the economic adviser's own money flows into motor sport. Added to this is the support of sponsors.

Because of Jürgen Lässig's close acquaintance with Jochen Holy, the characteristic BOSS lettering appears on the Reutlinger's racing cars for the first time ever. The Group C Porsche with the pinstripe design becomes the best-selling model car of the Porsche 956. At the team presentation in Hockenheim in 1983, Holy sat in a provisionally attached emergency seat. At the end of the long straight in front of the Motodrom, Holy calls out: “Breake, man, brake!" He hears the driver's answer: "There's still a little left." Next sentence from the BOSS boss: "Please let me out of the car." How short the braking distances are in a racing car can only be determined by the example of the race track. 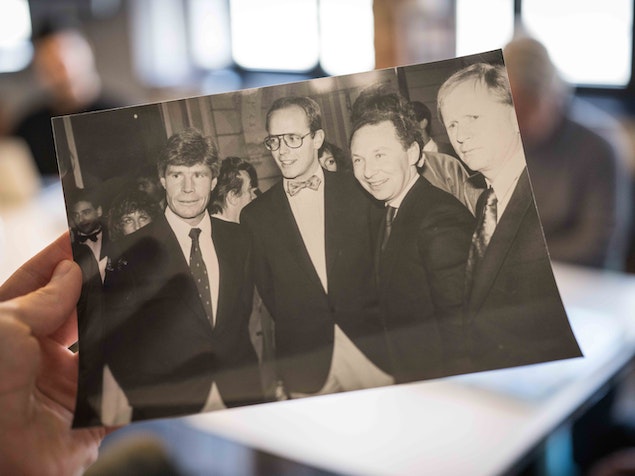 Jürgen Lässig enjoys the racing environment. The car approval on Wednesday before the race in the middle of the old town of Le Mans. The fans are close to the drivers. They write autograph after autograph. Especially in 1989 the Porsche is surrounded by girls. "Not because of me, but because of Paul,” Jürgen Lässig grumbles. Paul Belmondo, the son of the great actor Jean-Paul Belomondo, belonged to the driver trio of this Porsche at that time.

On the night of Le Mans in cool air, the turbo engine delivers a little more power. As fastest in the field, the Lässig-Porsche is measured at 378 km/h. At this speed, the driver perceives the slight bend towards the end of the six-kilometer straight as a curve. Lässig raves, "what an experience, that's what I did all this for!" What bothers him is that the full throttle straight exit was defused by two chicanes in 1990. And he enjoys the ride into the rising sun when man and machine have survived the night unharmed. "I'm kind of romantic by nature." What does it feel like when the race is finished successfully and you drive through the flag waving marshals to take a last lap? Honest answer: “That's when the tears come."

That would have been a nice final sentence, if we hadn't forgotten to mention the victory at the Daytona 24 Hour Race in 1995. Please, Mr Lässig: "Daytona is special because of the steep turns and long night in January. On every lap I have to lap slower cars and always be prepared for surprises. Like at Le Mans I've got to be quick but also take care of the car. So, don't drive too hard, shift early". Daytona winners receive a product from the main sponsor. It is called Rolex. Where did the watch end up? "At my house of course", he says and laughs goodbye. 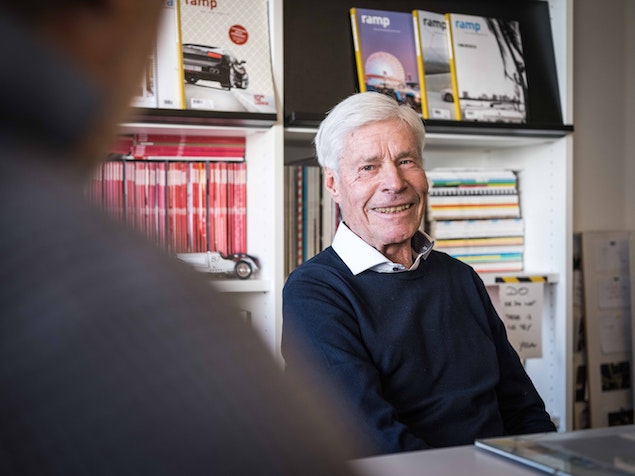